[THE WRETCHED opens in Ravenna, OH on Friday May 22nd at the Midway Drive-In Theatre.] 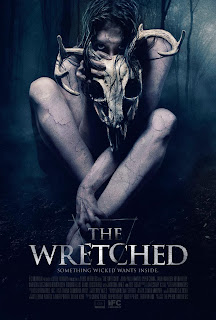 In ordinary times, a movie like THE WRETCHED would likely have had a few late night screenings in select markets before going on to digital, where it would have had a hard time getting noticed amidst all the other low budget horror offerings. But with the Covid-19 pandemic completely upending the normal patterns of movie distribution, and major studios either holding back their releases or sending them straight to digital, a niche has opened for low to mid budget films to play theatrically at drive-in theaters (and apparently a few indoor screens in states that have relaxed social distancing rules).

It is thanks to this unique set of circumstances that THE WRETCHED, a modestly budgeted horror film from writers/directors Brett and Drew T. Piece, finds itself at the top of the box office charts, taking in around $300,000 since opening May 1st on 11 drive-in screens. This Friday it expands to a few more locations, including the Midway Drive-In in Ravenna, OH. It’s also available to watch at home on the streaming platform of your choice.

That’s an interesting backstory for the film, but what really matters is whether it’s worth watching, pandemic or no. The answer is… kinda? Let’s just get to the review.
Read more »
Posted by Bob Ignizio at 5:06 PM 0 comments

There's something out there in 'The Vast of Night' 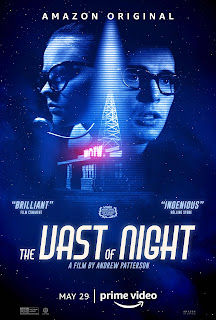 While THE VAST OF NIGHT is set in the 1950s, its themes are just as relevant today as they ever were. On the surface, the film is about two small town teenagers – radio DJ Everett (Jake Horowitz) and switchboard operator Fay (Sierra McCormick) – trying to track down the origins of a mysterious radio signal that interferes with both the phone system and Everett’s broadcast. What it really seems to be about, though, are small town fears. Both the fear of being stuck in a place where you don’t belong and don’t see much future, and the opposite but equal fear of leaving that place, no matter how stifling it might be.

Director Andrew Patterson, working from a script by James Montague and Craig W. Sanger, allows his film to unfold at a leisurely pace. Not only does that give us plenty of time to get to know our two leads and the world they inhabit, but it allows the mystery and suspense to build slowly and naturally. There’s talk of UFOs and possible alien abductions, and a subplot about a government cover-up that touches on our nation’s legacy of racism. But Patterson plays it subtle, and doesn’t try to juice things up with contrived action or peril. There is a satisfying (albeit ambiguous) payoff in the end, but it’s far from the sort of climax one would find in a more mainstream film.

‘Butt Boy’ sucks you in to its dark world 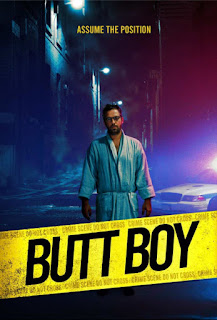 I’ve seen a lot of weird movies in my time. Weird is kind of my thing. And I can honestly say I haven’t seen anything quite like BUTT BOY. Maybe the closest comparison would be DAVE MADE A MAZE, but even that’s a stretch. It’s perhaps a kindred spirit to Adam Rifkin’s insane cult classic THE DARK BACKWARD, but while it may be almost as bizarre, BUTT BOY is decidedly its own movie.

So now that we’ve established what it isn’t, what, exactly, is BUTT BOY?

Structurally, this film fits in the neo noir/police procedural genre, with a bit of addiction and recovery drama thrown in. Office worker and family man Chip Gutchell (Tyler Cornack) discovers during his first ever prostate exam that he really likes having things inserted in his butt. And as time goes on, the bigger the better, up to and including small pets and even babies. He tries to kill himself and fails, but eventually seems to get his strange compulsion under control through AA meetings.