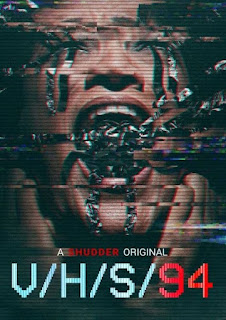 After a 7-year hiatus, the found footage anthology franchise V/H/S returns with its latest installment, V/H/S 94. Streaming exclusively on Shudder, it’s a grisly but fun collection of bite-size horrors from multiple filmmakers that capture the essence of the era in which they are set (1994, natch) while also tapping into the fears of our present.

The framing sequence, Jennifer Reeder’s “Holy Hell”, involves a SWAT raiding the compound of a religious cult involved in distributing an especially nasty narcotic that causes its users to gouge out their own eyes while watching videos. This of course offers up the excuse for watching the other short films.

Chloe Okuno’s “Storm Drain” sees a local newscaster (Anna Hopkins) and her cameraman (Christian Potenza) investigating reports of a local urban legend called Ratman. Simon Barrett’s “The Empty Wake” concerns a funeral home employee assigned to host (and record) a wake for a suicide victim as bad weather approaches. Timo Tjahjanto’s “The Subject” is a pulpy tale of a mad scientist trying to create cyborgs. And Ryan Prows “Terror” evokes both the Oklahoma City bombing of the anthology’s nineties setting and the far right hate groups of our present, only with a supernatural twist.

As usual for this series, the film’s shot on video aesthetic looks and feels authentic. It’s still a fun segment, though, don’t get me wrong. Also par for the course with this series, the gore and violence, while not too excessive, feel a bit more “real” than your typical Hollywood horror film. At times the segments feel a bit too cartoony (or in the case of “The Subject”, video game-y) to feel like true found footage, but overall the film finds a good balance between realism and enjoyable (if dark and gruesome) fantasy.

All the segments are good, but “Terror” impressed me the most. First of all, it felt the most believable as actual found footage. Plus, the weapon the terrorists plan to use in their plot was clever and original, so points for that. It’s also the segment that most taps into potential real fears, even if couched in fantastical elements.

This isn’t likely to work for those who hate found footage movies in general, and the intentionally rough looking style of the V/H/S movies in particular. But if you enjoyed the previous 3 installments of this series, you’ll be glad to know the quality of the series remains high, and at least for this viewer, the gimmick hasn’t lost its charm just yet. 3 out of 4 stars.