31 Days of Halloween Day 7: A Reenvisioned Classic Comes Off as Cartoonish in 'Night of the Animated Dead' 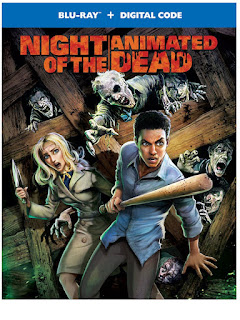 When George A. Romero’s NIGHT OF THE LIVING DEAD was released in 1968, the distributors inadvertently released it without a copyright notice. This allowed the movie to slip into the public domain. The most obvious ramifications of this situation are that basically anyone can release a copy of the film on home video. But beyond that, it allows for various remakes and spinoffs to use the film’s plot and title, very rarely with satisfying results.

The latest film to appropriate Romero’s classic is the aptly titled NIGHT OF THE ANIMATED DEAD, a nearly line for line, shot for shot cartoon version of John Russo’s script directed by Jason Axinn. And honestly, it isn’t a completely horrible idea. As much of a classic as the original is, and as much as I love it, there are aspects that could be improved. Notably, the cast ranges from excellent (Duane Jones in the lead role of Ben) to… not so excellent (Judith Ridley as Judy). And while I personally like the black and white cinematography and minimalist gore and effects, having more modern looking zombies and more blood and gore isn’t necessarily a bad idea.

Sadly, NOTAD fails on almost every level. The animation looks cheap and the character designs are undistinctive. There seems to be a half-ass attempt to make at least some of the characters look like their live action counterparts, but not all of them. And the animated gore is handled so ineptly that even though there’s more of it, it  comes off as laughable rather than horrifying. This is especially problematic when it comes to the film’s ending, which anyone who has seen the original knows should be no laughing matter.

Despite the presence of a few notable actors in the voice cast, no one seems to be bringing their “A” game to the project. Everyone’s delivery is bland and flat, and the same is true of the direction and editing. There’s just no energy to this thing, no pacing, nothing to keep you watching except the knowledge that it’s only 70 minutes long, so at least it’ll be over quickly.

I don’t like beating up on movies, but there’s just no good reason to watch this. Director Axinn says his goal was to make a version of the film that’s more accessible to modern audiences, but not only has he failed in that regard, there are other, better alternatives. First and foremost, the 1990 live action remake directed by Tom Savini. It’s not perfect, but it’s a respectable update that makes a few changes while largely hewing to the original.

Or if it’s just the black and white aspect that’s a problem for some viewers, watch the (I can’t believe I’m saying this) colorized version.

Really, though, I’d recommend putting aside any prejudices you might have towards black and white films and watch the original film the way it was intended. You can find it on any number of free streaming services like Tubi or Youtube. But the best way to see it is the restored bluray released by Criterion. Just don’t waste your time with this new craptastic cartoon version, which I rate 1 out of 4 stars.