31 Days of Halloween Day 6: It's Revenge of the Mushroom People in 'Gaia' and 'In The Earth' 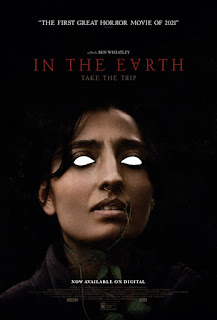 Louie Schwarzberg’s 2019 documentary FANTASTIC FUNGI walked (or perhaps more accurately, blurred) the line between science and new age woo in its exploration of earth’s fungal lifeforms, and the theory that they may have some sort of interconnected intelligence. Similarly, the late Terrence McKenna wrote several books on his belief that mushrooms and other plant-based hallucinogens were a way to communicate with a metaphysical intelligence he referred to as “the other”.

Perhaps that same intelligence reached out to filmmakers Ben Wheatley and Jaco Bouwer, who independently of one another made IN THE EARTH (Wheatley) and GAIA (Bouwer, from a screenplay by Tertius Kapp). Both films deal with the fungal kingdom interacting with humans. But rather than benevolent enlightenment, the protagonists wind up taking decidedly bad trips more akin to Ishiro Honda’s MATANGO, known to American aficionados of psychotronic cinema as ATTACK OF THE MUSHROOM PEOPLE. 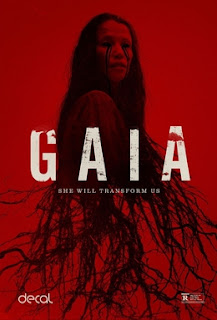 To a fairly large degree, the same plot synopsis can apply to both IN THE EARTH and GAIA. In both films, researchers explore environments where there are large fungal growths. There the protagonists meet former scientists who have seemingly been driven to madness by their exposure to hallucinogenic spores. Both films also hinge on the idea that this madness is caused by nature trying to send a message that humans are destroying the planet, and that we’d better start listening if we want to survive as a species.

It’s heavy stuff if you’re just looking for a fun little horror film, but if you like your scares served up with some food for thought, there’s plenty to feast on in both films.

Joel Fry and Ellora Torchia give relatable and naturalistic performances as the explorers in IN THE EARTH, unsure whether or not to trust the shaggy woodsman played by Reece Shearsmith (of ‘League of Gentlemen’ fame) and the possibly mad scientist played by Hayley Squires. The performances in GAIA feel a bit more “actorly” in a mainstream sort of way, but Monique Rockman nonetheless makes for a compelling lead as she tries to navigate the familial dynamics of Carel Nel’s mad prophet and his naïve and sheltered son (Alex Van Dyk) while searching for her travelling companion, played by Anthony Oseyemi.

If you’re looking for trippy visuals, GAIA edges out IN THE EARTH by a hypha. However dim Bouwer’s view, he can’t help but compose beautiful shots for his hallucination scenes. But he proves just as capable of depicting moments of ugliness and horror. Wheatley’s visuals could still trigger a flashback, but overall his film feels less psychedelic, which is a bit surprising given how out there his previous venture into mind expanding horror, A FIELD IN ENGLAND, was.

Both films deliver enough disturbing imagery and moments of cringe inducing violence to earn their place in the horror section. GAIA arguably gives viewers more on this front, with its mushroom/human hybrids looking particularly horrific. That said, Shearsmith’s matter of fact madman in IN THE EARTH isn’t someone you’d want to come across in a dark forest.

Thematically, both films seem to be saying humans need to start looking at science and the spiritual in a more integrated way, with IN THE EARTH taking a more grounded and hopeful view than GAIA. There’s a lot of ambiguity and complexity in both films, and they can be tough going at times, but at least for this viewer the payoffs were rewarding. All in all, a pretty good double feature, with neither film quite edging out the other but rather serving as a compliment. 3 out of 4 stars.