31 Days of Halloween Day 10: 'WNUF Halloween Special' Captures the Spirit of the 80s and Halloween 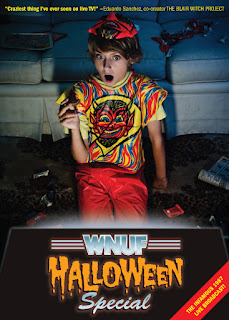 This one flew under my radar when it was originally released, but it caught my eye while scrolling through the content available on Shudder. The conceit behind the WNUF HALLOWEEN SPECIAL is that it’s a local TV newscast from Halloween night 1987 that someone recorded on a VHS tape, commercials at all.

The film feels authentic, even if the commercials for made up TV shows, movies, and products occasionally spoil the illusion. Not that they don’t feel believable, mind you, it’s just that anyone who knows the era knows the commercials aren’t for real things that actually existed. Younger viewers might not know that, though.

Anyway, in true local news fashion, an intrepid but smarmy reporter trudges off to the local “haunted” house, where a spiritualist couple were murdered by their son years ago. A local priest and a couple of psychics (with their psychic cat, natch) come along, too. While reporting from the scene, he trades bad puns and dad jokes with the anchor team back at the station.

It’s all pretty mild stuff at first, but as the film goes along, tension starts to mount, eventually culminating in some pretty solid moments of horror.

Like the V/H/S series, the latest of which I recently reviewed, how much you like the WNUF HALLOWEEN SPECIAL will largely depend on your tolerance for found footage horror films in general, and ones that try to capture the media of a previous era in particular. Regardless of one’s preference in that regard, though, it’s hard to deny that writer/director Chris LaMartina has achieved what he set out to do, and in excellent fashion.

The only other thing I’d want to add is that this isn’t as kid friendly as it first appears. While by no means a gore fest, there are some pretty intense moments in the film’s last half hour that do get a bit bloody and brutal. Animal lovers in particular may have issues. There's no lingering on the carnage, but the newscast format does give the proceedings an air of reality not present in slick Hollywood fare. Not an issue for me, but figure some might appreciate the heads up. Those caveats aside, this is about as perfect a piece of Halloween entertainment as one could ask for. 4 out of 4 stars.