Finally getting caught up to the present today, this time with a batch of comic/graphic novel reviews. So if you only care about the movie reviews, you can skip this one. Hopefully you don't, though. 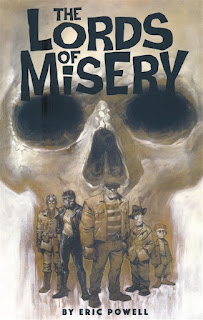 Day 25: ‘Lords of Misery’ Written and illustrated by Eric Powell. While I’m a bit sad that we haven’t gotten a Spook House comic from Eric Powell this year, at least we have an extra special team-up event featuring The Goon and a band of misfit anti-heroes unwillingly recruited to battle an ancient evil. Past incarnations of the Lords have always managed to triumph, but at the cost of their lives.

We already know at least The Goon and his sketchy sidekick Franky survived the fight, seeing as this story takes place before the latest issues of their regular ongoing, so it’s a bit anticlimactic. That doesn’t make it any less fun, though. All the usual things that make The Goon a must read title are here – the hard-boiled humor, the aura of supernatural horror, the film noir tough guy anti-heroics, and of course, Powell’s first rate artwork. Pick it up. 3 out of 4 stars. 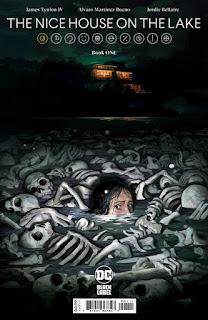 Day 26: ‘The Nice House On the Lake’. Written by James Tynion IV and illustrated by Alvaro Martinez Bueno with colors by Jordie Bellaire. The setup is that the mysterious Walter invites several of his carefully chosen friends to the titular house for what they believe to be a simple get together. When the apocalypse happens, though, they soon learn their host is more than he seems. Seemingly the only people left alive, Walter’s friends have their every need taken care of. But who can just go on living in a gilded cage, especially when there are so many unanswered questions?

This is more in the Twilight Zone side of things, but there’s still plenty of genuine horror, especially when we see what happens to those not so fortunate as to be in the house. The mystery drives the plot, of course, but the characters are all interesting enough that we’re more than happy to spend time getting to know them as they go about trying to figure things out. As I write this, the series is a little under halfway through its 12 issue run. If your local comic shop has all the back issues, you might as well buy ‘em all and jump in now. Or you can just wait until the obligatory collected edition. Either way, highly recommended. 4 out of 4 (at least so far) 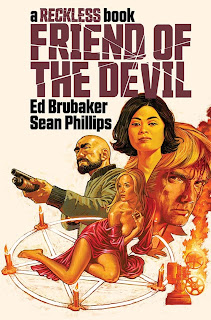 Day 27: ‘Friend of the Devil’. Written by Ed Brubaker, illustrated by Sean Phillips. Brubaker and Phillips’ latest collaboration, a series of graphic novels starring private eye Ethan Reckless, is by and large more in the adult action/adventure vein ala such seventies and eighties paperback rack perennials as The Executioner and The Destroyer. However, in this case they lean more into horror territory with Reckless running up against a Satanic cult.

Set in the 1980s, Brubaker conjures up a group of Devil worshippers who fulfill every ludicrous flight of fantasy that made up the “Satanic Panic” of that era. Only in Brubaker’s hardboiled world, the Panic is real. The story is gripping, and Sean Phillips’ art once again provides the perfect match. And don’t feel as though you need to read the previous Reckless book. Like the cheap novels that inspired this, it stands alone just fine, but will have you wanting to read more. 4 out of 4 stars.