Once again doing some shorter capsule reviews to get caught up with my Halloween blog-a-thon. So let's get to it. 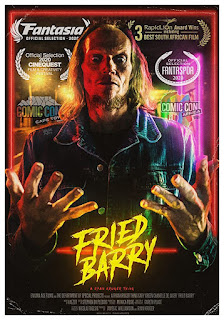 Day 21: FRIED BARRY. Addicted to drugs, a shitty husband and a shitty father, Barry is probably not the kind of guy you’d want to be a representative of humanity to an alien race. Nonetheless he gets abducted by extraterrestrials take control of his body and use him to walk among earthlings as one of them. As it turns out, most folks like this new alien controlled version of Barry better than the real deal, even if he does act even weirder than before.

Great visual style and out there ideas from writer/director Ryan Kruger. This is a nutty acid trip of a movie that barely hangs together as a coherent narrative, but that given the main character that feels about right. There’s some social commentary buried under the weirdness somewhere, but mostly this is just messed up fun. Reminded me of movies like THE HIDDEN and THE BORROWER a little bit, but ultimately this is its own weird thing. 3 out of 4. 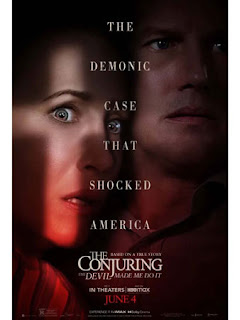 Day 22: THE CONJURING: THE DEVIL MADE ME DO IT. Despite my feelings that the Warrens, the husband and wife “paranormal investigators” this series of films is loosely based on, were either con artists or mentally unstable (perhaps both), I’ve nonetheless enjoyed the first two CONJURING films, as well as their spin-offs, as the silly, spooky fun they are. This latest installment, based on a case where the Warrens got an accused murderer’s attorney to use demonic possession as a legal defense in an actual court of law puts an end to that run of dumb but satisfying thrills.

It’s not that the premise is any worse than the previous two films. It’s that the execution by director Michael Chaves and writer David Leslie Johnson-McGoldrick feels like they’re just going through the motions, rehashing a lot of the same beats as the previous entries. Series stars Vera Farmiga and Patrick Wilson still give their all, but this is just a lesser entry. I’m sure some will still enjoy it, but strictly judging this film by the standards of its own series, this falls short. 2 out of 4 stars. 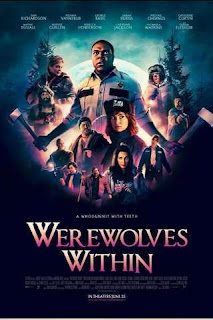 Day 23: WEREWOLVES WITHIN. Affable forest ranger Finn Wheeler (Sam Richardson) arrives at his new post only to find that the locals are at each other’s throats over a proposed new pipeline. Literally, it seems, once Finn discovers the body of one of said locals. Eventually everyone winds up barricaded in a lodge, convinced that a werewolf is on the loose and chowing down on the residents. But is that really the case, or is it just an ordinary murderer? And either way, who is the culprit?

Like the character of Finn, WEREWOLVES WITHIN is likeable, but not especially deep. The whodunnit aspect will keep you guessing, and there are some okay comedic touches that try to push the film into LAKE PLACID territory. It’s rated R, but by modern horror standards it’s a pretty soft R. Probably more for a few too many F-bombs than the gore, which is pretty tame. If language isn’t a big deal for you, this might even make an okay movie to watch with older kids as it’s not too scary, but scary enough to be fun for Halloween. 2 ½ out of 4 stars. 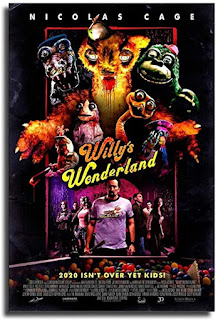 Day 24: WILLY’S WONDERLAND. A nameless man (Nicolas Cage) has his car break down in a small town. In order to pay for repairs, he agrees to work as janitor at the titular abandoned kid’s pizza place. Sounds like an easy gig, but it turns out the animatronic animals that once entertained tots as they stuffed their faces with ketchup covered cardboard and played video games are actually homicidal monsters. If you’re thinking this sounds a lot like the mobile video game FIVE NIGHTS AT FREDDY’S, you’re not wrong, despite denials from director Kevin Lewis and writer G.O. Parsons that they were influenced by FNAF. Sure, guys.

Look, we all love seeing Nicolas Cage go bonkers. And if that’s all you need, this will probably provide it for you. But honestly, the guy makes so many movies in a given year, it’s not hard to find one or two that are better than this turkey. For whatever reason, Cage doesn’t have any dialog, although given how uninspired everyone else’s lines are that’s not necessarily a bad thing. And while there are a number of kills as the requisite stupid teens decide to sneak into the pizza place while Nic is cleaning up and battling the animatronics, the gore and violence seems surprisingly subdued.  A movie like this should have embraced the insanity, but WILLY’S WONDERLAND plays it safe instead. 1 out of 4 stars.

Email ThisBlogThis!Share to TwitterShare to FacebookShare to Pinterest
Labels: 31 Days of Halloween 2021, Fried Barry, Horror, Nicolas Cage, The Conjuring: The Devil Made Me Do It, Werewolves Within, Willy's Wonderland