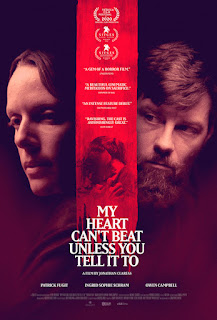 A number of factors have conspired to keep me from being on top of my Halloween blog-a-thon. Mainly I’ve just been busy, but there’s also the fact that a lot of what I’ve watched either hasn’t been good, or even if it has it just didn’t grab me in a way that made me want to rush out and write about it. But today I find myself with a little extra time, so I’m going to cheat a bit and do short capsule reviews to get caught up. I’ll do another one of these tomorrow and Wednesday, and then hopefully be back on track through to the big day.

Day 17: MY HEART CAN’T BEAT UNLESS YOU TELL IT TO. The plot of this low key vampire flick from writer/director Jonathan Cuartas focuses on three siblings. Thomas (Owen Campbell) is vampire who has all the weaknesses we’re accustomed to in such monsters, but none of the cool aspects. He needs blood, but can’t hunt on his own. That’s up to his brother Dwight (Patrick Fugit), who commits murders so his brother can feed and go on with his miserable existence. Sister Jessie (Ingrid Sophie Schram) is the family matriarch, just barely holding this situation together through force of will.

This is like the horror movie equivalent of listening to Sufjan Stevens or Bon Iver. Very quiet, very subtle, very indie. The family dynamic is reminiscent of THE TEXAS CHAIN SAW MASSACRE, and the depiction of vampirism recalls George Romero’s MARTIN. It’s a very well-made film, but just not my thing. I do get why it has had so many good reviews, though, and if you’re looking for something a little more thoughtful and serious rather than scary that still fits the bill for the Halloween season, you could do a lot worse. 3 out of 4 stars. 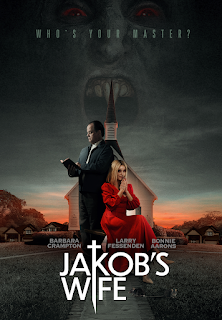 Day 18: JAKOB’S WIFE. Scream Queen Barbara Crampton plays Anne, an unhappy preacher’s wife whose husband Jakob (indie horror stalwart Larry Fessenden) takes her for granted. She decides to hook up with an old flame, but her fling doesn’t go so well when it turns out the guy just wanted to bring her to his vampire master as a meal. Now a vampire herself, Anne not only has a thirst for blood but a new lust for life.

The critiques of religion and traditional gender roles are a bit muddled, but you’ll get the point. And what horror fan wouldn’t want to see Crampton and Fessenden share the screen in a film that gives both of them roles with depth and substance? Not to mention there’s plenty of gore and macabre humor. All in all, a solid low budget vampire flick from director/co-writer Travis Stevens. 3 out of 4 stars. 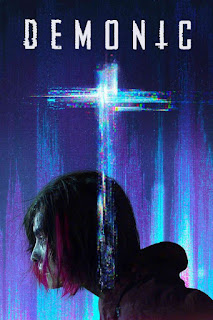 Day 19: DEMONIC. A shady group of Priest/scientists use virtual reality technology to send Carly (Cathy Pope) into the mind of her mother Angela (Nathalie Boltt), a catatonic convicted mass murderer. This being a horror film, things don’t go well and we eventually learn that Angela is host to a demon, and that demon is looking for somewhere else to jump. Predictably, mayhem ensues.

I’ve enjoyed all of Neil Blomkamp’s films up til now. Yes, even CHAPPIE. This one was just okay, a well-made but not particularly interesting by-the-numbers possession film. Even the technological angle doesn’t add much in the way of freshness to the proceedings, as we’ve seen similar ideas explored in movies like THE CELL. Passable, but also one you can pass on. 2 ½ out of 4 stars. 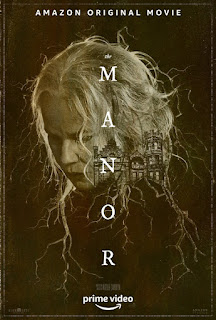 Day 20: THE MANOR. In this “Welcome to the Blumhouse” entry hot granny Judith (Barbara Hershey) decides to move into an assisted living facility so she won’t be a burden to her family, even though her doting grandson Josh (Nicholas Alexander) doesn’t want her to. Things seem okay at first, and there’s even the possibility of a nursing home hook-up with silver fox Roland (Bruce Davison). But it doesn’t take long before Judith starts to notice a whole lot of red flags, including a possible supernatural entity that feeds on the residents. Or could it all just be signs of dementia?

This is a pretty solid concept, and the execution by writer/director Axelle Carolyn and her cast is pretty solid. Unfortunately the film feels a bit longer than it needs to be, even at a mere 91 minutes. Even worse, the ending just doesn’t feel satisfying because it doesn’t seem true to the characters. Still, some effective chills and the overall quality of the production keep it from being a total wash. 2 ½ out of 4 stars.