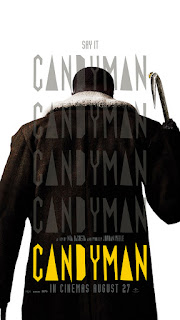 While I don’t arbitrarily hate all horror remakes and sequels, in general I find most of them to be comfortably familiar, eminently forgettable entertainments at best, and crass cash grabs at worst. But there’s always those exceptions that prove the rule, like John Carpenter’s remake of THE THING, or Sam Raimi’s EVIL DEAD 2, films that stand on their own as classics of the genre. Nia DaCosta’s CANDYMAN is a welcome addition to that exclusive club.

CANDYMAN 2021 is a sequel to Bernard Rose’s 1992 film of the same name, but while I would recommend checking out the original, it’s not necessary. DaCosta gives us all we need to know about the urban legend surrounding its hook-handed killer and the events of the previous film via a nifty little shadow puppet show, just one of the film’s many satisfying stylistic flourishes.

Set in Chicago’s Cabrini Green, what once was a crime-ridden ghetto has now largely become gentrified, spurred on by artist types like painter Anthony McCoy (Yahya Abdul-Mateen II) and his gallery director girlfriend Brianna (Teyonah Parris). Anthony becomes fascinated by the stories about Candyman told to him by the few remaining black residents of the neighborhood, in particular Billy Burke (Colman Domingo).

Eventually the stories inspire Anthony to create a new series of works that explore the history of violence perpetrated against black people both in Cabrinin Green, and in America in general. In the process, he also makes the mistake of saying “Candyman” five times into a mirror, which every horror fan knows is a bad idea.

There are plenty of creepy moments and outbursts of violence and gore, but there’s a deeper exploration of the real-life horror of racism and the often unpunished violence done to minorities by the white majority in this country that can’t help but resonate in a post George Floyd world. Horror has often been at its best when blending scares with social commentary, and DaCosta strikes just the right balance here. She also throws in just the right amount of fan service, even if you have to wait for it, but on that subject I will say no more.

Given the politically charged nature of the film, and the way horror fans almost never agree on any movie these days, I’m sure not everyone will find CANDYMAN satisfyingly sweet. For me, however, it’s the best horror film of 2021 so far. 4 out of 4 stars.