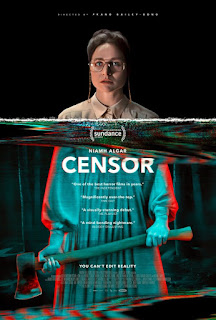 For British horror fans in the 1980s, it was the best and worst of times. That’s when home video companies took advantage of loopholes in the law to release previously banned or heavily censored horror movies in uncut form on home video.

At least for a while.

Once the British tabloid press realized what was going on, they bestowed the mantle of “Video Nasties” on these lurid films. And of course, they tried to blame all manner of real life crimes on their influence. All without any evidence. But when has that ever got in the way of a good moral panic?

And so, the British Board of Film Classification started cracking down on home video horror. Some films were banned outright and selling or renting them could (and sometimes did) result in prosecution. Others were able to be edited in such a way as to pass muster and were released in censored form. It is this time and place in history in which Prano Bailey-Bond’s CENSOR takes place

CENSOR’s protagonist Enid (Niamh Algar) works for the BBFC, where she makes decisions about what films need to be cut, and which need to be kept from impressionable eyes completely. Informing her work and her life is a tragedy from her past, her sister Nina having disappeared when the two were children.

Although the case is closed and Enid’s parents have accepted that their other daughter is never coming home, Enid still holds out hope. That hope is bolstered when Enis watches a horror movie and comes to believe one of the cast members may be her missing sister grown up. Alga’s performance gives us a character who is stiff and standoffish while still being sympathetic enough that we care what happens to her. She may not be easily likeable, but we never lose sight of the fact that who she is has been shaped by the loss in her life.

Some might view CENSOR as more of a drama than a true horror film, but it offers up more than enough disturbing and frightening moments to qualify as part of the genre. Bailey-Bond clearly has a soft spot for the old school video nasties and draws influence from several of them. In particular, the soundtrack and color palette owe a good deal to Italian horror films from the likes of Dario Argento and Mario Bava.

Despite the influences, though, CENSOR never goes full-on homage/pastiche. Rather it uses the atmosphere and style of those films as a way to explore the psyche of its protagonist, and by extension the mindset that fueled the video nasty moral panic. It’s debatable if the movie has anything fresh to say on the subject – plenty of other works have pointed out the arrogance and hypocrisy of censorship. But even if its familiar territory, the way CENSOR explores it is never less than engaging. 3 ½ out of 4 stars.