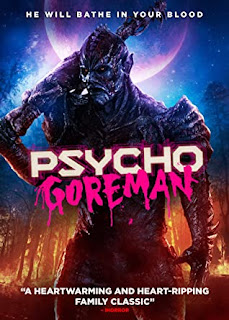 If E.T. was an unstoppable killing machine and Eliot was a sociopathic little girl, you might wind up with something like PSYCHO GOREMAN. Proudly wearing its influences on its sleeve, PSYCHO GOREMAN captures the vibe of low budget eighties schlock better than any recent film this side of TURBO KID, basking in nostalgia while at the same time managing to feel fresh and original despite all the classic tropes and retro imagery it trots out.

The plot is set in motion when Siblings Mimi (Nita-Josee Hanna) and Luke (Owen Myre) dig up a glowing space artifact in their back yard that gives them control over the alien monster buried just a little further down. The alien (Matthew Ninaber), who Mimi has dubbed Psycho Goreman, or “PG” for short, promises to kill the kids the moment he is free of their control. Luke is understandably concerned, but Mimi let’s her dark side run wild, reveling in the power of having her own personal alien enforcer.

Meanwhile, the members of “The Space Alliance” realize that PG is free, thus putting them in danger. They send the warrior Pandora (Kristen MacCulloch) to take care of the problem, but as far as us humans are concerned, Pandora doesn’t seem much more concerned about our well-being than her quarry. Eventually it all comes to a head in a gooey final battle.

Writer/director Steven Kostanski isn’t looking for cheap “my movie is bad on purpose, ha ha” laughs the way so many retro genre films do. He’s genuinely trying to make the best movie he can with the limited resources he has, and succeeds more than he has any right to.

Which is not to say there isn’t plenty to laugh at in PSYCHO GOREMAN. It’s just that the humor has nothing to do with the film being purposefully cheap and shoddy. And while many of the laughs come from splatstick goreomedy, there’s a fair bit of cleverness, too.

The film is reasonably effective as a straightforward gory sci-fi/horror action fest, too. Making the most of its old school practical effects, the creature designs are cool and the gore gleefully disgusting. Modern CGI may look slicker and more polished, but there’s something about even the cheesiest practical effects that feels more concrete because it’s actually happening in the same space as the actors.

I was lukewarm on Kostanski’s previous films THE VOID and LEPRACHAUN RETURNS, although they both had their moments. With PSYCHO GOREMAN, he manages to find my personal genre sweet spot. This is a movie that smoothly combines the sensibilities of a Troma flick like THE TOXIC AVENGER with the higher caliber of writing and special effects you’d get from something like RE-ANIMATOR or RETURN OF THE LIVING DEAD. Sure, it’s still trash on some level, but it’s good trash. And seeing as this blog is called Utter Trash, it's no surprise I enjoyed the heck out of it. 3 out of 4 stars.