31 Days of Halloween 2021 Day 28: 'Horror Noire' Explores The Horror of Race in America 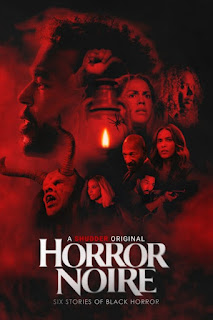 Spinning out of the 2011 book Horror Noire: Blacks in American Horror Films from the 1890s to Present by Robin R. Means Coleman which in turn led to the 2019 documentary HORROR NOIRE: A HISTORY OF BLACK HORROR, we now have the anthology film HORROR NOIRE (no additional subtitle). The film is an anthology of six short horror tales from black filmmakers with primarily black casts, and like many anthologies, the results are a bit hit and miss.

“The Lake” is about a teacher apparently coming out of a troubled relationship who takes a job at a new school and moves in to a beautiful lake house. Her caretaker warns her not to go swimming in the lake, though, because it has a tendency to bring out the worst in people. There’s a lot in this segment that goes unexplained that really should have been clarified, and the ending is abrupt and unsatisfying.

In “Brand of Evil” is a more satisfying segment in which an artist puts his own financial success ahead of his community, with predictably unhappy results. This feels like it would have fit in well in a TALES FROM THE HOOD film, delivering both strong social commentary and comic book style horror.

“The Bride Before You” is a period piece dealing with class and skin shade issues within the black community. It also has witchcraft, hauntings, and some sort of giant homicidal monster. The old school gothic horror vibe gives it a traditional feel, almost like a Hammer or Roger Corman Edgar Allan Poe movie, which I’m always down for. More importantly, it handles its subtext deftly and delivers on the shocks.

A charismatic preacher is leading his flock very much astray. He’s so persuasive, he even manages to get his hooks into a cable news talking head known for being critical of religion. Another pretty decent segment, with the added highlight of starring the O.G. Candyman himself, Tony Todd.

The vampire tale “Sundown” is another TALES FROM THE HOOD/CRYPT style episode.that finds a group young folks canvasing for a progressive candidate in the south. After a hard day in which they talked to very few potential voters, they come back to find their tires slashed just as the sun is going down. The writing and performances are intentionally a bit campy, but the segment nonetheless has some bite (hey, I’m allowed a few bad puns).

“Daddy” deals with a young father’s fears that he isn’t up to the task of raising a kid due to his own parental issues. It’s a well made segment with a relatable message regardless of one’s race, but it doesn’t quite stick the landing.

It’s not a bad ration of good to bad for an anthology. The biggest problem with HORROR NOIRE is that it doesn’t really feel like an anthology film. There’s no framing segment or any strong connective tissue, and the tone varies greatly from segment to segment. Also, the overall length (two and a half hours) makes one wonder why the choice was made to turn this into a feature when it might have worked better as a series. And maybe that would be the best way to treat it, watching a segment or two per sitting and spreading it out over a few days. It certainly wouldn’t harm one’s experience of the film. 3 out of 4 stars.