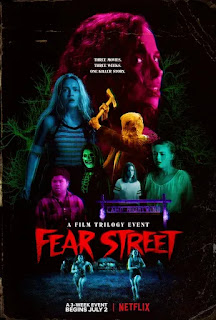 5 ½ hours is no small amount of time to invest in a trilogy of horror films based on a series of teen oriented horror novels by R. L. Stine if, like me, you were already well past the target demographic when the books came out, and are a full on cranky old man now. But there was a fair amount of buzz surrounding the FEAR STREET films on Netflix, so I figured I’d give the first movie a shot.

By the time I’d reached the half hour mark of FEAR STREET: 1994, I’d had enough. It wasn’t just the jumbled and overstuffed YA ‘American Horror Story’ vibe of the thing, although that was a big part of it. No, the straw that broke this camel’s back was the obnoxious “greatest hits of the 90s” as DJed by someone with ADHD soundtrack. Here, enjoy a few seconds of Radiohead’s “Creep”. Ok, enough of that. Here’s a bit of “Sour Times” by Portishead. OR how about some Nine Inch Nails, or a little Cypress Hill? Do you feel like you’re in the nineties yet?  Ugh.

But I kept seeing friends and critics alike praise the films, so I grudgingly steeled myself to give it another go, and this time stick it out for the whole trilogy.

So let’s get the plot synopsis out of the way. The town of Shadyside is basically the “wrong side of the tracks” to upscale Sunnyvale, where all the douchey villains from eighties teen movies settled down when they were older. Sunnyvale thrives, while Shadyside isn’t just a poorer community, it’s a hotbed for brutal murders.

The saga opens with one of its best scenes, depicting just such a horrific incident. A teenage B. Dalton employee is murdered by another mall worker, seemingly without motive. The killer himself is then shot dead when the cops finally arrive.

Not surprisingly, the incident is the talk of the high school. Some students put the blame on an ancient witch’s curse, among them the nerdy Josh (Benjamin Flores Jr.) who sees a pattern of violence in his town going back centuries. His sister Deena (Kiana Madeira), however, doesn’t share his belief. And besides, she’s too busy dealing with the breakup of her relationship with girlfriend Samantha (Olivia Scott Welch). But young heartache will have to be addressed later as the body count rises, and the supernatural aspects of the horror can no longer be denied.

FEAR STREET: 1978 focuses on the survivor of a prior murder spree whose tale provides some valuable clues, while FEAR STREET: 1666 does the old ‘Dark Shadows’ bit of having the cast play oldentimes versions of themselves to reveal the true origins of the curse.

My opinion of FEAR STREET: 1994 did not improve for having made it through the whole film. There are laudable aspects – notably the deft handling of the lesbian relationship that felt natural and non-exploitive, and the obvious glee writer/director Leigh Janiak takes in the films’ stylish and gory horror set pieces – but overall, it was a tough slog for me. And in general, my opinion stayed the same for the other two installments.

The story is overly familiar, and the “twists” are so obvious and telegraphed that I always felt two steps ahead of the story. And as mentioned earlier in this review, the whole thing has a very ‘American Horror Story’ vibe. Like AHS, FEAR STREET throws so many ingredients into its stew that the flavors never coalesce into something distinctive. And the soundtrack remained just as grating throughout, excepting the 1666 segment – thankfully we have no records of “America’s Top 40” from that era.

I wouldn’t say I thought FEAR STREET was terrible. The characters were likable, and the plot was engaging enough to keep me watching once I got past my issues with the soundtrack. Arguably the final installment, which has a bit of a BLOOD ON SATAN’S CLAW/CRY OF THE BANSHEE feel to it, is better than the previous two. But since none of the films can stand on their own, watching it by itself wouldn’t be particularly satisfying.

Based on the good ol’ Tomatometer, my opinion is in the minority. So if you haven’t already, maybe read some other takes. For me, though, it’s an awful lot of content to get through for something that, in toto, is just okay. 2 out of 4 stars.