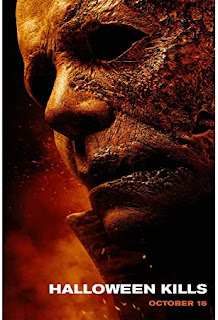 John Carpenter’s 1978 HALLOWEEN remains a classic, a film that despite its vintage (over 40 years old!) still, for the most part, holds up. There are a few cosmetic issues – since the film was shot in California instead of Illinois where it was set, the trees are still green, and the teenage protagonists are all just a bit too old to convincingly play high schoolers. But the script, the performances, the music, Dean Cundey’s cinematography, and most importantly, Carpenter’s direction, are so strong that any flaws the film might have barely matter. It’s damn close to being a perfect movie. The many sequels and remakes the film has spawned… not so much.

Still, when acclaimed indie director David Gordon Green rebooted the franchise with 2018’s HALLOWEEN, I was intrigued. First of all, I really like most of Green’s non-HALLOWEEN movies. And though many fans would disagree, I was happy that his sequel jettisoned all of the franchise baggage to serve as a direct sequel to Carpenter’s original. The results, while not perfect, were at least worthwhile.

In HALLOWEEN (2018), Green and screenwriting collaborators Danny McBride and Jeff Fradley decided to focus on the idea of the lasting scars a trauma like the one visited on Laurie Strode (Jamie Lee Curtis), the original film’s “final girl”, would leave. That was at least interesting, even if I felt the film as a whole didn’t completely work. I had some issues with his previous film, but enjoyed it enough that I was at least optimistic going into HALLOWEEN KILLS. Unfortunately, that optimism proved to be unwarranted.

Picking up right where the previous film left off, Laurie is on her way to the hospital along with her daughter Karen (Judy Green) and granddaughter Allyson (Andi Matichak), after surviving an attack by Michael Myers (James Jude Courtney and Nick Castle). Despite Laurie’s injuries, the three generations of women take solace believing they have at last finally vanquished the killer. Of course, as Tommy Doyle, the little boy Laurie was babysitting in the 1978 original said in that film, “you can’t kill the boogeyman.”

The injuries Laurie suffered are so grievous even by movie standards that she remains sidelined in a hospital bed for most of HALLOWEEN KILLS. So when Michael comes striding out of the burning wreckage of Laurie’s house, it’s up to a band of survivors from the 1978 original to try and finish him off this time – the aforementioned Tommy (Anthony Michael Hall) and the other kid Laurie was babysitting, Lindsey (Kyle Richards). Tommy’s former bully Lonnie (Robert Longstreet). Police officer Frank Hawkins (Will Patton). And Marion (Nancy Stephens), a nurse who survived an attack by Myers when he broke out of the asylum. The younger generation helps out, too, with Laurie’s granddaughter Allyson and Lonnie’s son Cameron (Dylan Arnold) joining the impromptu mob.

That’s a lot of characters to follow for one movie, and the movie further clutters the cast with the inclusion of (former) Sherriff Bracket from the 1978 film (Charles Cyphers), current Sherriff Barker (Omar Dorsey), and a number of other Haddonfield residents who get a fair amount of screentime. Part of what made Carpenter’s original work so well was its simplicity and compactness, but that lesson seems to have been lost on Green, McBride, and their new screenwriting partner Scott Teems.

Man is this a clunky movie. It has no flow whatsoever. And it’s further dragged down by attempts to comment on current events in the real world.

I have no problem with social commentary in horror. It’s always been a part of the genre, even if it wasn’t especially important to the HALLOWEEN franchise until Green got on board. But the attempts to comment on mob mentality just feel heavy handed and forced here. If you have to have your main character give a monologue spelling out your subtext, then you’ve failed as a filmmaker. I mean, a line or two like Peter in DAWN OF THE DEAD saying “they’re us, that’s all” is one thing. But Laurie gives a whole speech laying it out.

Not to be completely negative, there are some good aspects to the film. Despite considerably less screen time, Curtis still does a great job as Laurie. And of course it’s fun to see more of the old characters return, all but Tommy Doyle played by the same actors. A few critics have complained about the brutality of the kills, and I do kind of get that, but I also think a horror movie ought to be, you know, horrific. And this one certainly is. Also the music, by original director/composer John Carpenter, his son Cody, and Daniel Davies, is of course great. In the end, though, the film’s shortcomings far outweigh its positives. And while I understand this is the middle part of a trilogy (yes, we’ve got one more of these to dread/look forward to), I found the ending especially unsatisfying. 2 out of 4 stars.