31 Days of Halloween 2021 Day 15: Vampires Prey on the Downtrodden of New Orleans in 'Black as Night' 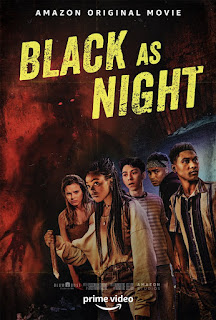 Like the works of Anne Rice and Poppy Z. Brite before it, BLACK THE NIGHT makes the case that Transylvania has nothing on New Orleans when it comes to being a stomping ground for vampires. And in a post-Katrina world, the vamps have found plenty of easy prey in the Big Easy among those left behind by the recovery.

Teenaged Shawna (Asjha Cooper), along with her dad and brother, has fared better than some. Sadly, the same cannot be said for her mom Denise (Kenneisha Thompson), who has fallen into drug addiction. When Shawna discovers her mom isn’t just an addict but has joined the ranks of the undead, she and her friends Pedro (Fabrizio Guido), Chris (Mason Beauchamp), and Granya (Abbie Gayle) band together to take on the local bloodsuckers under the thrall of Lefrak (Craig Tate) and an immortal former slave named Babineaux (the always welcome Keith David). But can just a small group of teens be any match for the vamps? Hey, it worked for Buffy.

As the above synopsis implies, the film injects some elements of social commentary into its horror story, examining the way minority communities are often left behind after disasters like Katrina. It also deals with issues of prejudice among the African-American community itself regarding various shades of skin color – Shawna is made fun of by her brother for being too dark.

The way the film deals with addiction is more honest and nuanced than what one usually sees in movies. And the way Shawna’s dermal hue eventually factors into the vampire plot is both clever and affirming. But at the risk of sounding like I’m on the side of those griping about how “wokeness” has ruined everything, I have to say that the social commentary aspects of BLACK AS NIGHT aren’t always handled deftly here. The intentions are good, but the execution is a bit clunky.

The bigger problem for the film is that a lot of it feels overly familiar. It also doesn’t help that the climactic showdown is a bit flat. All that being said, the film feels like writer Sherman Payne and director Maritte Lee Go actually cared about the story they were telling. They wanted to make a fun “B” action/horror movie while slipping in a little social commentary and a bit of positivity, and for the most part they succeed. Maybe not mandatory viewing, but you can certainly do a lot worse. 2 ½ out of 4 stars.