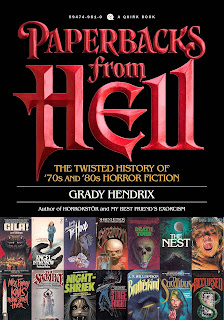 Let’s face it, I am exactly the target audience for this book. I grew up in the seventies and eighties, loving the horror genre in all its formats. Movies were my favorite way to get a fright fix, but horror novels were a close second. And man were there a lot of them during those two decades, calling out to me from the shelves of my local bookstore with their lurid covers and enticing taglines.

Thanks to Grady Hendrix and his hugely enjoyable book ‘Paperbacks From Hell’, it’s now possible to enjoy the best parts of the literature in question – the aforementioned covers and basic synopses of the batshit crazy plots – without having to invest the time it would take to read in their entirety what were, if we’re being totally honest, mostly mediocre books.

Hendrix breaks things down partially by era, and partially by subgenre. The starting point for his history lesson is the “Big 3” of Ira Levin’s ‘Rosemary’s Baby’, Thomas Tryon’s ‘The Other’, and William Peter Blatty’s ‘The Exorcist’. This terrifying trio were released between 1967 and 1973, putting horror at the top of the best seller’s list for the first time in decades and setting in motion the trends that would carry the genre through to the early 90s.

If you’re interested in the serious side of this history, Hendrix more than delivers. But where his book truly excels is in simply having fun with the more ridiculous books. There are plenty of laughs to be had as Hendrix regales us with plots involving Nazi leprachauns and giant genital eating praying mantises. And yet somehow, Hendrix manages to cover even the dumbest plots without sounding condescending to the genre. Sure some of this stuff is stupid, but at least it’s not dull.

Throughout the book there are also a number of sidebars highlighting both writers and cover artists who were particularly notable in this niche market. But perhaps the best part of the book are the many full color reproductions of paperback cover art. Even knowing there’s no way most of these books could ever live up to their covers, if you’re like me you’ll be scouring used book stores and garage sales in the hopes of finding some of these mostly out of print titles to read for yourself, even knowing that only disappointment awaits. As for ‘Paperbacks From Hell’ itself, though, it’s anything but a disappointment. 4 out of 4 stars.