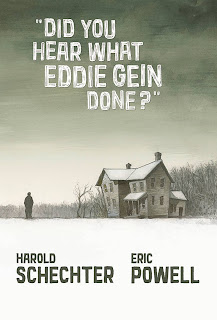 If you know your serial killers, then you’re probably already aware that grave robber and murderer (and possible cannibal) Ed Gein served as an inspiration for PSYCHO, THE TEXAS CHAIN SAW MASSACRE, and THE SILENCE OF THE LAMBS. But his own story is just as interesting as any fictionalized horror film.

Writer Harold Schechter has previously told Ed’s story in his book 'Deviant' (1998). Now he has teamed up with one of my favorite comic book artists, Eric Powell, to tell the story in graphic novel form. The results are a bit mixed, but ultimately worthwhile.

In case you don’t know who Ed Gein was, he was a seemingly harmless local oddball who lived in Plainfield, Wisconsin. In 1957, it was discovered that he had murdered a local shop owner, and when police raided his home, they discovered further body parts. Most of the body parts appeared to have been taken from graves, but evidence also pointed to Ed having committed at least a couple of other murders. The driving force behind Ed’s crimes appears to have been an unhealthy obsession with his late mother.

As far as the substance of the book goes, there’s not a whole lot in ‘Did You Hear What Eddie Gein Done?’ that wasn’t in 'Deviant'. A few tidbits here and there, but nothing of major import. And Schechter’s writing style is best described as meat and potatoes muckracking, so if you’re already familiar with the facts of the case, either from Schechter’s book or others, it’s not like the way he tells it here is any big draw.

That leaves us with the art by Eric Powell, which thankfully proves more that capable of delivering customers their money’s worth. If you’ve never read Powell’s comic series ‘The Goon’, well, you should. But beyond that, his art style somehow manages to be both realistic and cartoonish at the same time. He's equally at home depicting everyday working-class folks as he is in pulling forth macabre images from his pen. Berni Wrightson, Wally Wood, Walt Kelly, and Will Eisner are the influences I see the most, but Powell combines them into something distinctly his own.

Even when the writing is a bit bland (and despite the subject matter, it can be), Powell’s art pulls you in to the story. But despite his love of the horrific, Powell also knows where to draw the line. There are some gruesome images, to be sure, but the artwork never crosses the line into being exploitative.

The biggest drawback to DYHWEGD is in its straight forward, “just the facts” approach to the narrative. While laudable, it also can be a bit dry at times. Still, for those interested in Ed Gein’s story, this tells it without elaboration. Schechter does ponder certain unproven possibilities regarding the crimes, but at least he makes clear that such speculation remains unverified.

Bottom line, if you just want the story of Ed Gein, you may be better off with Schechter’s previous book on the subject. But then you’d miss out on all the great Eric Powell artwork. So yeah, just read this. 3 out of 4 stars.