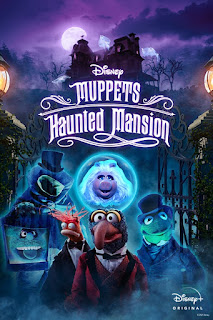 The Muppets have always embraced their scary side, with various monsters making up a respectable percentage of the cast going back to their TV variety show from the seventies and early eighties, and even further back if you count Sesame Street, where Kermit the Frog got his start. And of course, two of the my favorite episodes of the original Muppet Show were the ones hosted by Vincent Price and Alice Cooper.

Now that The Muppets, like nearly everything else in the world of entertainment, are owned by Disney, a crossover with Disney’s Haunted Mansion seems like not a terrible idea. But given the uneven track record of the Muppets since the Mouse House acquired them, one could also be reasonably skeptical.

Thankfully, MUPPETS HAUNTED MANSION turns out to be spooky fun for all ages.

Kermit and Miss Piggy take a back seat for this one, with Gonzo the Great and his pal Pepe the Prawn getting the spotlight instead. Gonzo is invited to a party in the allegedly haunted mansion that once belonged to his favorite magician, The Great MacGuffin. Turns out there’s a catch, though: he has to survive the night or else his spirit (and that of Pepe, too) will be trapped there forever.

From there on, it’s pretty much nonstop spooky shenanigans, but not TOO spooky. Like the best Muppets material, HAUNTED MANSION manages to be kid friendly while still appealing to grown-ups. It feels suitably macabre, and the central theme of Gonzo overcoming his fears has some weight to it, but overall this is just good, spooky Halloween fun.

The other Muppets characters show up in various forms in the mansion, as do the usual celebrity guest stars the franchise has always utilized. The jokes are corny, and there are musical numbers. The Muppets themselves are mostly voiced by newer performers and may not always sound exactly the way old geezers like me remember, but the spirit is there.

And it is that spirit, perhaps even moreso than in any of the modern era Muppet projects, that makes this a respectable addition to the Jim Henson legacy. MUPPETS HAUNTED MANSION probably doesn’t qualify as “great”, but I would hazard a guess it will prove an enjoyable enough entertainment for most fans, both young and old. 3 out of 4 stars.