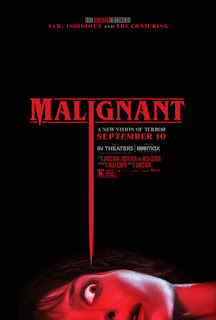 The setup for MALIGNANT will likely have horror savvy viewers expecting writer/director James Wan to revisit similar territory to his INSIDIOUS and THE CONJURING films. Once it gets into gear and starts throwing one insane twist after another at the audience, however, it becomes clear that this is a very different animal altogether.

Sure, the big budget slickness and Wan’s style are there, but at its heart MALIGNANT is an over the top, go for broke, just plain crazy horror film that has more in common with such gooey, goofy eighties fare as BASKET CASE and THE EVIL DEAD 2 than it does with the usual Blumhouse type fare. There’s also a heavy dollop of giallo style in the fashion of Dario Argento (DEEP RED, TENEBRAE), and a dash of seventies psychic horror ala CARRIE, thrown in for good measure. I’d say there’s even a little bit of THE ABOMINABLE DR. PHIBES in this film’s DNA, although not quite as pronounced as it was in Wan’s SAW.

After opening with a flashback to a mental institution massacre, the film settles into the present day where we meet Madison (Annabelle Wallis). Madison is pregnant and reasonably concerned for her baby given a history of miscarriages, but her abusive husband Derek (Jake Abel) is more worried that she’s interrupting his TV viewing. For causing him this inconvenience, Derek shoves Madison into a wall hard enough to open a gash in the back of her head.

Madison gets away from Derek and manages to lock herself into a bedroom where she falls asleep. When she wakes up, she discovers Derek has been violently murdered.

Leading up to Derek’s death, we also get a few POLTERGEIST type paranormal shenanigans, adding to the feeling that this will be just another mainstream modern horror demonic haunting flick like Wan’s INSIDIOUS films. But Wan is just lulling his audience into a false sense of security. Once viewers get nice and comfortable, he shifts into high gear and gleefully sends his film careening over the cliff.

I know this movie has been out for a while, but I'll refrain from spoilers nonetheless. I’ll just say that the film more than delivers the goods when it comes to stylish set pieces and gratuitous violence. Like a man worried he might not get to make another movie despite his profitable track record, Wan seemingly throws every crazy idea he’s ever wanted to realize into the pot.

Given that approach, it’s no surprise that MALIGNANT isn’t too concerned with realism. If you’re an analytical viewer, there are all kinds of things to nitpick about. But Wan’s direction is so assured, and the film’s momentum so unrelenting once it gets going, that it’s hard not to just get swept up in the insanity. And as much as I personally enjoy the more serious minded, intellectual horror that has been all the rage in recent years with films like THE WITCH and HEREDITARY, it’s a nice change of pace to watch a movie that just wants to make its audience jump and scream, logic be damned, and does it with panache. 3 ½ out of 4 stars.