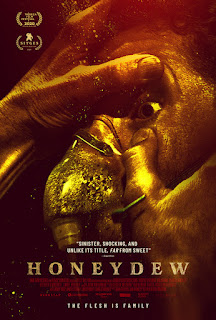 The setup for HONEYDEW is so familiar, one almost can’t help but feel its main characters deserve whatever horrors befall them. Like, haven’t you guys ever watched THE TEXAS CHAIN SAW MASSACRE? Writer/director Devereux Milburn obviously has.

A young metropolitan couple – actor/waiter Sam (Sawyer Spielberg, yes, son of that Spielberg and Kate Capshaw) and botanist Rylie (Malin Barr) – are so busy showing us how much they shouldn’t be together that they miss all the obvious red flags letting them know they’ve stumbled into a hicksploitation horror film.

Sam and Riley are on a road trip when they lose their GPS signal as well as cell service. Lost in the middle of nowhere with the sun going down, the couple decide to wait until the next day to proceed. Being the entitled young professionals they are, they decide to just set up camp on what turns out to be private farmland.

The land’s owner, the pipe smoking Eulis (Stephen D’Ambrose), shows up in the middle of the night to let Sam and Rylie know they can’t stay. The couple also discover that their car battery has died. And so they head off through the woods in search of a signal for their phones.

Eventually they come upon a farmhouse where the obviously loopy Karen (Barbara Kingsley) and her son Gunni (Jamie Bradley) reside. Still, Karen seems helpful enough. She offers the couple food, then calls a neighbor to jump start the stalled vehicle. But something (actually, lots of things) seems a bit off. It may be Massachusetts and not the Lone Star State, but that doesn’t mean there aren’t rural weirdoes just waiting for unsuspecting city-folk to fall into their clutches.

From the seventies style font used in the credits, to the ambient dissonance that serves as the film’s soundtrack, and especially in the film’s plot and characters, HONEYDEW wears its influences on its sleeve. The film’s mentally unstable family may not be an exact one-for-one match with CHAIN SAW’s Leatherface, the Cook, the Hitchhiker, and Grandpa, but they come close. And there may be fewer protagonists for said family to dispatch, but our main characters walk just as blindly to their potential deaths, and with a similar mix of hubris and ignorance that comes from having led a sheltered life. Driving the comparisons fully home, everyone eventually sits down (some more willingly than others) for a dinner from Hell with a very questionable main course.

But where Tobe Hooper’s masterpiece managed to strike a perfect balance between raw horror, black comedy, and social commentary, HONEYDEW comes across as too smug and pretentious by far. Its critiques of classism are ham-fisted and obvious where CHAIN SAW’s were subtle and sly. The way Milburn examines the dysfunctional relationship between Sam and Rylie is a little more interesting and nuanced, but ultimately not enough to give the film the real weight it seems to be trying for.

Hooper isn’t the only seventies horror icon Milburn borrows from. There are heavy dollops of Cronenbergian body horror, and the industrial film Riley watches about a wheat fungus called sordico feels like something you’d see in an early Cronenberg film, too. The frequent use of split screen also recalls Brian DePalma. Certainly other filmmakers have incorporated these elements into their works, but this is the kind of movie where the appropriation is so obvious it becomes distracting.

That said, HONEYDEW is not without its merits. Milburn knows how to make an audience jump and squirm, and also how to drill into their psyche and leave more lasting impressions. He also knows how to break the tension when needed, and the film’s moments of grim, deadpan humor work more often than not. The film has a striking visual style that keeps the viewer’s eyeballs on the screen even when their first instinct might be to turn away. And perhaps most importantly, HONEYDEW has a momentum that keeps us engaged even as our analytical side is busy ticking off all the lot points, characters, and tropes it borrows from its most obvious inspirations.

In the end, while parts of it work, HONEYDEW doesn’t quite hit its mark. It’s too intellectual and too disturbing to be fun but doesn’t offer enough food for thought to join the ranks of recent arthouse horrors like MIDSOMMAR or IT FOLLOWS. I don’t feel like I wasted 90 minutes watching it, but this isn’t one I can see myself ever revisiting. 2 ½ out of 4.