'The Fish that Saved Pittsburgh' can't even save itself

CONFESSIONS OF A GEN-X PREMIUM CABLE JUNKIE: THE FISH THAT SAVED PITTSBURGH (1979) 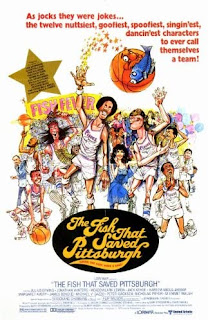 I’ve never been a sports fan. Never. Not baseball, not football, not basketball. The closest I’ve ever come was a period in my late adolescence through my early twenties when I was a fan of professional wrestling, which really doesn’t count. That said, I’ve always enjoyed sports movies. Go figure.

And while I didn’t watch basketball games during the seventies, I nonetheless knew who Julius Erving aka Dr. J. was. Like Lebron James, Michael Jordan, and Magic Johnson, he was the sort of athlete who transcended basketball to become a pop cultural icon. If you were alive in the late seventies, you just knew who he was.

Even more than Dr. J., though, I was familiar with Meadowlark Lemon, who played for the Harlem Globetrotters. For those who don’t know, much like the professional wrestling matches I would enjoy in later years, Globetrotters games were staged, with the predetermined outcome that the Globetrotters would always win. Also like professional wrestling, the fact that the games were staged in no way meant that the athletes were not highly skilled. But beyond their playing ability, the Globetrotters were first and foremost entertainers. And thanks to their appearances on Saturday morning TV (on Scooby Doo, and later their own show in which they were superheroes of some sort) I was a fan despite having never seen an actual Globetrotter game.

It was in this context that I approached THE FISH THAT SAVED PITTSBURGH when it showed up on pay cable. And at the time I saw it, I found the movie sufficiently entertaining to the point that it stuck in my brain as a pleasant memory. So let’s see how it holds up.

Imagine, if you will, that the beloved baseball comedy MAJOR LEAGUE had been released twenty years earlier in 1979. And instead of being set in the world of professional baseball, it took place in the NBA. Oh, and instead of the jokes being funny they… aren’t. Well, you don’t have to imagine. All you have to do is watch THE FISH THAT SAVED PITTSBURGH.

Much like the Cleveland Indians in MAJOR LEAGUE, the Pittsburgh Pythons are technically a professional sports team, but their play is amateur level. Even with star player Moses Guthrie (Julius Irving aka “Dr. J”) on the roster, the team just can’t seem to put up the points.

Luckily the team’s plucky water boy Tyrone (James Bond III) recognizes the problem – the players aren’t astrologically compatible. Since the team is so bad, Tyrone is able to convince both Moses and team owner H.S. (Jonathan Winters) to fire all the old players and replace them by holding open tryouts, with the goal of only signing other players who share the same astrological sign as Moses, Pisces.

Not surprisingly for a movie like this, the team is a collection of wacky misfits and ethnic stereotypes. Oddly enough, the film spends little time with these kooky characters. Meadowlark Lemon gets a couple of character moments as a preacher who would rather be shooting baskets than saving souls, but even he gets fairly short shrift from the screenplay by David Dashev, Jaison Starks, and Edmond Stevens (based on a story by Gary Stromberg).

Instead the script plays up a romance between Moses and Tyrone’s older sister Toby (Margaret Avery). Conceivably, that could have worked if the romance had been written in an interesting way and/or the actors had any chemistry together. Sadly, neither is the case. I don’t blame Ms. Avery. She’s likeable enough, and her long and prolific career in film and television attests to the fact that she’s a capable actor. The fault lies with the hackneyed writing and her bland leading man. Dr. J. may have heated up the basketball court, but on screen he’s a cold fish. And hey, let’s not leave anyone out. The pedestrian direction by Gilbert Moses doesn’t help, either.

There are other weird aspects of the movie that, while not fatal, tend to detract from one’s enjoyment. Why, for instance, use a fictional team in a city that didn’t even have a pro basketball team at the time? Part of what made MAJOR LEAGUE such a hit, and beyond that a cult film that people watch over and over to this day, is that it tapped into the very real reputation of the Cleveland Indians at the time.

But the biggest problem with FISH is in the way the team becomes an instant success. There’s no tension between the team members, and with them winning every game, no suspense about what’s going to happen on the court, either. Things only become dramatic when team’s astrologer Mona Mondieu (Stockard Channing) is kidnapped before the final championship game. It just doesn’t make for compelling cinema.

Noted producer/songwriter Thom Bell wrote or co-wrote most of the songs used in the film. Some he performs himself with his orchestra, but the soundtrack also includes contributions from some of the biggest funk, soul, and R & B artists of the time. There are some winners here from acts like The Four Tops and The Spinners, but clunkers like the film’s theme song (“Hey, have you heard? It’s the fish that saved Pittsburgh, whoah” – repeat until you want to smash your head in with a hammer) are less thrilling.

So no, THE FISH THAT SAVED PITTSBURGH did not live up to my memories of it. Nonetheless, it does have some value as a time capsule, and as a lesson in how two movies with the same basic premise can be vastly different in execution. As bad as the movie is, I still had some fun revisiting it, but it’s not one I can recommend.