[WIVES OF THE SKIES premieres on Amazon Prime on Tuesday September 29th.] 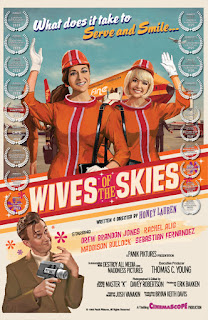 I didn’t really expect a film dealing with 1960s stewardesses and Japanese bondage to be simultaneously charming, sexy, and feminist. But that’s exactly the case with the Honey Lauren’s short WIVES OF THE SKIES. Showing an attention to 1960s period detail and filmmaking technique similar to Anna Biller (VIVA, THE LOVE WITCH), Lauren explores the private lives of two young women whose job it is to cater to the needs of airline passengers and look fabulous while doing it. While objectified by many, the reality of who they are is very different than the typical male fantasy.

Our window into this world in the film comes via documentary filmmaker Derrick (Drew Brandon Jones). When he decides to interview stewardesses Fran (Rachel Alig) and Marcy (Madisson Bullock) for a documentary on their profession, he does so with a number of preconceptions and expectations. It isn’t long before his expectations are dashed.

WIVES OF THE SKIES is a very skillfully conceived and put together film with a winning cast. I’m just not sure there’s enough here to lift it above the level of a good looking, pleasant diversion, even with the feminist subtext and the respectful depiction of Japanese rope bondage (kinbaku). It feels like the first act of a feature film that then tacks on a majorly abbreviated conclusion more than a self-contained vignette. Regardless, the well-crafted visuals, humor, and subtext make this one worth a look. Besides, it’s a safe bet you’ve got 20 minutes to spare. You probably aren’t going to be catching a flight anytime soon.