Come on and Join Our 'Convoy' 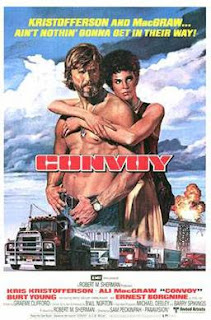 I can’t really talk about my nostalgia for Sam Peckinpah’s 1978 film CONVOY without first talking about what, for many Clevelander’s of a certain age, is the definitive film version of C.W. McCall’s 1975 hit country song. I’m talking about the version of “Convoy” made for airing on the Saturday afternoon Cleveland area movie program hosted by Superhost aka Marty Sullivan (you can read my interview with Marty here). The short, silly little music video Supe and his crew came up with for “Convoy” is about as perfect an adaptation of the song as one could hope for.

It was in no small part due to Supe’s version that I wound up watching Peckinpah’s CONVOY when it premiered on Star Channel, most likely sometime in 1979. And while I doubt there was any way it could have topped the Superhost version for my younger self, I do nonetheless remember enjoying the feature for its numerous fight scenes and car crashes.


When Peckinpah made CONVOY he was at a low point in his career and needed a hit. A film based on a hit song dealing with the then popular craze for trucker culture seemed a good bet for the veteran filmmaker.


It also probably helped that truck drivers represented a sort of honorable outlaw figure in America. These knights of the highway did a tough and crucial job, and yet were constantly being hassled by “Smokey Bear”, the CB lingo name for Highway Patrol officers. Given his affinity for outlaw figures in such classic films as THE WILD BUNCH, PAT GARRETT AND BILLY THE KID, and THE GETAWAY, one can see how the subject matter would have appealed to Peckinpah.


But then, cops in general have it out for all the truckers in this movie. The Duck just barely gets out of a ticket from another officer after passing a Jaguar driven by Melissa (Ali MacGraw) by convincing the cop that he had been distracted by the woman’s lack of clothing. Hoping to get a look for himself, the officer lets the Duck off with a warning and chases down the Jag.


But the Duck’s luck doesn’t last forever. When he forms a small three truck convoy with Pig Pen (Burt Young) and Spider Mike (Franklin Ajaye), Lyle the truckers using his CB into thinking the road ahead his free of bears. By the time Duck sees Lyle’s car on the side of the road, it’s too late, and the shady cop shakes down all three drivers, taking cash bribes in exchange for not writing them tickets.


The principals eventually converge at a truck stop. While the Duck is out in the lot getting his “birthday present” from his sometime girlfriend (and Lyle’s wife) Violet (Cassie Yates), Lyle is once again making trouble for the truckers. Eventually a full on cops versus truckers brawl erupts. The truckers win, but have to go on the run in order to avoid further legal complications.


Having already picked up a few trucks after the fight, the Duck and his pals continue adding to their convoy as their story spreads. Unfortunately for the truckers, the cops keep adding to their ranks as well. Before long it becomes bigger than just the Duck, with the media asking truckers about their grievances, much of which have to do with the then fairly recent 55 mile per hour speed limit laws. As news spreads, the general public is shown to be firmly on the side of the outlaw truckers rather than the forces of law and order. Even some politicians appear to be on the side of the truckers, although they of course hope to harness the rebellion for their own ends. It all leads up to a final explosive confrontation.


Given the film’s troubled production history, it’s a miracle that CONVOY is watchable at all. Wikipedia, citing David Weddle’s book on Peckinpah ‘If They Move… Kill ‘Em!’, says that at the time of filming Peckinpah, “suffered from alcoholism and drug addiction.” This resulted in the director not being on set much of the time, with his friend the actor James Coburn apparently shooting much of the film.


Nonetheless the film does bear Peckinpah’s stamp. As mentioned, the film is very much in line with Peckinpah’s affinity for outlaw characters, not to mention just regular working class folks.


Peckinpah also changed the screenplay, notably by adding in the African American characters Spider Mike and Widow Woman (Madge Sinclair). That allowed him to insert a subplot dealing with police racism, although in the released cut it doesn’t play out to any great degree.


Of course, a movie is truly made in the editing. Referring again to Weddle’s book via Wikipedia, Peckinpah’s original cut of the film was well over 3 hours long. That wasn’t going to fly with the studio, who were looking for a fast-paced quickie to cash in on the trucker and CB craze, something more in the vein of SMOKEY AND THE BANDIT. And after chopping the film down by about half to just under an hour and 45 minutes, that’s what they had. Peckinpah disowned it.


Based on what’s here, it’s hard to imagine a version of CONVOY running twice as long being a good idea. Peckinpah’s aspirations aside, this is a movie based on a novelty country song meant to appeal to an audience that just wants to see car crashes.  They don’t want another hour and a half of character development and thematic complexity.


To be fair, the cast does good work here, and I have no doubt that Kristofferson and McGraw in particular might have had some interesting character bits that were cut. Still, it’s hard to imagine Peckinpah’s version being any kind of great revelation. My gut instinct tells me it would have been more of a self-indulgent train wreck.


Not that the version we got is any great shakes, mind you, but it is at least entertaining and delivers what its audience (and the studio) wanted. As a result, in what must have been a final insult added to injury for Peckinpah, CONVOY wound up being his most financially successful film.


Despite being based on the C. W. McCall song of the same name, we never actually hear the original hit version of “Convoy” during the film. Instead, we get a new version with lyrics altered substantially to reflect the screenplay, and a more synth heavy, less country production. This version of the song is then cut up and spread out over the course of the film as sort of a Greek chorus/handy exposition tool. As such, it never really gets a chance to make its impact felt the way it should. The soundtrack also includes a number of other country hits, mostly from the sixties and seventies, including songs by Crystal Gayle, Kenny Rogers, and Merle Haggard. These mostly take a back seat, but nonetheless add some authenticity to the proceedings.


It’s garbage, but it’s fun garbage. And thanks to Peckinpah’s (and Coburn’s) direction and the solid cast, it’s well made garbage. The film also serves as a time capsule of seventies trucker/CB culture and the whole protest against the 55 mile per hour speed limit that was a fairly big deal at the time. It’s also nice to see a movie about regular working-class people.


Perhaps most interestingly in light of where we are in the present, it’s interesting to see a movie in which cops are depicted as brutal, corrupt, and all-around bad guys. And folks who, let’s be honest, would most likely be Trump supporters these days are depicted as sharing those sentiments. Spider Mike and Widow Lady aside, it’s not hard to see what the difference is.


Okay, off my soapbox now. While I undeniably had fun watching CONVOY again after all these years, I can’t really see a need to do so ever again. Let’s call it 2 ½ out of 4 stars.