Cover your ears for 'The Shout'

CONFESSIONS OF A GEN-X PREMIUM CABLE JUNKIE: THE SHOUT (1978) 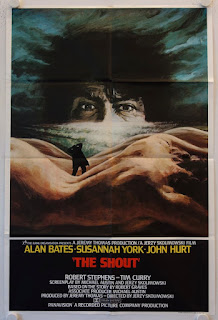 
It may seem odd to begin a series of blog posts aboutnostalgic movie memories with a film I didn’t actually see until just a few days ago, but allow me to explain. When my family first got Star Channel, the trailer for THE SHOUT seemed to be played almost constantly. I wasn’t entirely sure what was going on in this trailer, but it sure looked freaky. Must have looked freaky to my parents, too, as they made it clear I would not be watching this movie. And since I hadn’t quite yet worked out how to “sneak watch” movies I wasn’t supposed to see (that would come soon), I was out of luck.


Nonetheless, the trailer made an impression.


Given this fact, you’d think I would have rented the movie on VHS at some point in the eighties. But while Columbia did release the film on tape at some point, I don’t recall ever seeing it on the shelves of any of my local video stores. As for DVD, I don’t believe the film ever had an official release in the U.S. on that format. Across the pond, England got a DVD in 2003, and again in 2007, and there was a Blu Ray release in 2014. But aside from the fact that these releases just weren’t on my radar, they were all region coded, and I don’t have a region free player.


Thankfully, THE SHOUT is (for the moment, at least) available to stream in the U.S. on Amazon Prime, which is how I finally got around to seeing it.


Directed with impressionistic flair by Polish auteur Jerzy Skolimowski, THE SHOUT is arthouse horror with the emphasis decidedly on the arthouse half of the equation. Adapted from a short story by Robert Graves, the film opens with a scene of a car arriving at a mental hospital. It then cuts to the driver of the car, a nurse (Susannah York), as she races inside. “Where is he,” she asks? “In the dining room,” another nurse answers.


In the dining room, 3 bodies are laid out on tables. The nurse pulls back the sheets from the first two bodies, showing little emotion. She then approaches the third and final body hesitantly, and as she removes its shroud, the title comes up and the scene dissolves to an aborigine man in a long coat. He is walking along some sand dunes in the twilight. As dark gives way to dawn, the aborigine falls briefly to the ground, then stands up and walks towards the screen, pointing a dangerous looking bone at the viewer.


This is the first of many shifts in time and  space we will experience while watching THE SHOUT, a film which seems to relish keeping its viewers off balance, unsure of exactly what is going on, where it is happening, and when.


In terms of a plot, I suppose it could be summed up thusly: A man who, like the author of the story this film is based on, is named Robert Graves (Tim Curry) has been asked to help keep score for a cricket game at a mental hospital.


The asylum’s director (Robert Stephens) explains to Robert that his partner in score keeping is one Charles Crossley (Alan Bates). While the director describes Crossley as “the most intelligent man in the place”, he also considers him quite mad.


Crossley seems genial enough, and he and Robert strike up a conversation. Eventually Crossley offers to tell Robert a story about a man who “once had a wife who loved him”. He indicates this man is one of the cricket players (John Hurt). “Every word of what I’m going to tell you is true,” he promises. “Only I’m telling it in a different way. It’s always the same story. It’s always the same story but I… I change the sequence of events, and I vary the climaxes a little, because I like to keep it alive.” So right off the bat it’s clear we’re dealing with an unreliable narrator.


Crossley’s tale concerns an experimental composer named Anthony Fielding (Hurt), and his wife (York). It’s unclear if York, like Hurt, is supposed to be playing the same character in both the framing sequence and Crossley’s tale. Either way, while the Fielding’s seem to be a happy enough couple, Anthony is having an affair with a local girl.


And then Crossley enters the story himself, forcing himself into Fielding’s life and home through trickery and sheer force of will. He invites himself to dinner with the Fieldings, and regales the couple with stories of living in the Australian outback. He eventually crosses the line from odd to alarming when he claims to have murdered the children he had with his aborigine wife, which Crossley insists is perfectly legal under tribal law. He also tells Anthony that an aboriginal shaman taught him a secret “terror shout” that has fatal results for anyone who hears it.


The film just gets weirder and more intense from there. And since we can’t trust Crossley to necessarily tell us the truth, we don’t always know what parts are true, and what parts are the ravings of a madman. We get some answers as the film reaches its conclusion (which, as it turns out, may be just another beginning), but even then there’s some ambiguity, and a great many questions remain unanswered.


Some other thoughts on the film.


The asylum framing sequence seems inspired by THE CABINET OF DR. CALIGARI. Here, though, we know we’re in an asylum from the beginning, rather than having that revealed to us in a twist at the end. Another possible influence is Pier Paolo Passolini’s TEOREMA. There are certainly parallels in the way Bates’ mysterious stranger shows up in the lives of the Fieldings and completely upends them.


The characters are meant to be somewhat archetypal, and so aren’t very fleshed out. Sure, we get to see Hurt doing his job capturing unusual sounds in his recording studio, but that feels more relevant to the film’s themes than to his character.


Nonetheless the cast all do great work. Bates conveys real menace, but also on occasion vulnerability. Hurt is the quintessential middle-class prig, too worried about being impolite to deal with the obvious threat Crossley presents until it’s too late. And York is equally convincing whether playing the demure housewife or embracing a primal, almost animalistic sexuality once she takes  up with Crossley.


The film is rife with symbolism, not all of which I’m sure I get. For example, there are several pointed shots involving bees and wasps that I’m certain are meant to convey something (and, as my wife pointed out, the Fielding’s dog is named “Buzz”). And I imagine if I knew a bit more about cricket some of the shots involving the game might have had more significance. Or maybe not, but the camerawork certainly seems to imply as much.


What does it all add up to? Again, I’m not entirely sure. Although some sort of commentary on marriage and infidelity seems to be the crux. Perhaps even a bit of a statement on what we’d call toxic masculinity these days, as Hurt is given a taste of his own medicine for betraying his wife. At one point he even starts to think of himself as a cobbler, the same profession as the husband of his mistress. This seems to indicate he has switched roles, from being the virile philanderer to becoming an impotent cuckold. And Crossley certainly could be read as an avatar of masculinity at its worst, concerned only with himself, regarding women merely as objects to use for his pleasure. Of course, this is still depicted very much from a masculine point of view rather than a feminist one, with York’s Rachel more a possession than a person with any real agency.


Whether I completely understand it or not, THE SHOUT is an exceptionally well made film. As a fan of visual storytelling, I love that it’s full of beautifully composed shots that often convey important story and thematic elements one won’t find in the plot or dialogue. This isn’t the kind of movie you can half-watch while periodically checking your phone. And those who prefer their films to wrap everything up neatly may be frustrated by how this one ends, but at least the journey to that ending is never less than compelling.


The score is credited to “Anthony Banks and Michael Rutherford”, who generally go by Tony and Mike for their main gig in the progressive rock band Genesis. I can’t really picture myself putting the soundtrack album on for a listen in its own right the way I would with Goblin or Tangerine Dream, for instance, but Banks and Rutherford do a fine job creating a dark, dreamy, and ambient atmosphere that compliments the film rather than calling attention to itself.


I’d give this one 3 out of 4. I’m all for a little ambiguity, but as the closing credits rolled, I couldn’t help wishing things had been a little clearer. At the same time, the movie provides plenty of food for thought, and there are a few scenes likely to remain with me for some time. That counts for a lot with me, and if it does for you, too, give this one a look. And feel free to share your interpretations and theories in the comments if you do.