'Attack of the Killer Tomatoes' Delivers the Groceries

CONFESSIONS OF A GEN-X PREMIUM CABLE JUNKIE: ATTACK OF THE KILLER TOMATOES (1978) 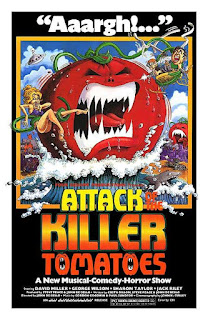 Despite this being a little more high profile than most of the movies I’m going to be covering in this series, it was in many ways the definitive “Star Channel” movie for me. So at the risk of ruining a perfectly nice bit of childhood nostalgia, I bought a digital copy and sat down for a trip down memory lane. To add even more pressure, I coerced my 9-year-old son into watching it with me. Would either of us find this seventies artifact, a movie often spoken of as one of the worst films ever made, entertaining in the 21st century? Let’s find out!


I was 9 or 10 when I first saw ATTACK OF THE KILLER TOMATOES, which is just about the perfect age to watch a movie like this. At that age, one is old enough to understand some of the inappropriate jokes and feel like they’re getting away with something, but still young enough to yuck it up at the silly, immature gags that made all the serious, adult critics of the time groan.


But who cares about the critics, especially when you’re a kid? For me, this movie was comedy gold. I made sure to get in a couple of repeat viewings while it was in rotation on Star Channel. I knew the theme song by heart. I drew crayon masterpieces of tomato carnage in art class. I’m pretty sure if it hadn’t been for STAR WARS, I would have told you at the time that ATTACK OF THE KILLER TOMATOES was the greatest movie ever made.


But as such things happened in the late seventies, ATTACK OF THE KILLER TOMATOES was eventually removed from Star Channel’s schedule. I got older, and saw many other, arguably better films along the way. Eventually I watched the film on VHS and found it to still be reasonably amusing. I also saw the so-called “director’s cut” released in 1995, only this time I wasn’t quite as amused. Mainly that was due to the alterations rubbing me the wrong way.


I haven’t seen the movie since. Until now.


As the title promises, ATTACK OF THE KILLER TOMATOES involves the titular produce somehow becoming mobile, sentient, and homicidal, and in some cases growing to enormous size. The government is leery of causing a panic, so a team is put together consisting of the most obscure generals, scientists, and special agents available. Selected to lead that team is special agent Mason Dixon (David Miller, looking like a poor man’s John Belushi).


Dixon appears to be at least marginally competent, but his crack team of experts are considerably less so. Dixon quickly ditches most of them - master of disguise Sam Smith (Gary Smith), swimming expert Greta Attenbaum (Benita Barton), and underwater expert Greg Colburn (Steve Cates).  Unfortunately for Dixon, it’s not so easy to give the slip to the final member of his team, Lieutenant Finletter (J. Stephen “Rock” Peace), a straight arrow paratrooper of questionable intelligence.


Overseeing Dixon’s investigation is the president’s press secretary Jim Richardson (George Wilson), but he seems to have an agenda of his own. Perhaps plucky reporter Lois Fairchild (Sharon Taylor) can get to the bottom of it all. And hey, if no one can figure out how to stop the rampaging romas and beastly beefsteaks, adman Ted Swann (Al Sklar) can at least put a positive spin on the catastrophe.


ATTACK OF THE KILLER TOMATOES was made for $100,000. Not an insignificant amount in 1978, but still a lower budget than even the films notorious skinflint Roger Corman was producing at the time. And yet despite the limited resources, it feels like a “real” movie, albeit of the sort more likely to play at the drive-ins and smaller independent theaters. Yes, the killer tomatoes themselves look cheap, but that’s part of the fun, and it’s obvious the filmmakers understood that.


As for the cast, although this is the sole credit for almost everyone involved, they’re actually pretty good. I’m not saying anyone necessarily made the wrong choice by not pursuing acting further. But no one is wooden or tripping over their lines. And the leads – David Miller, Sharon Taylor, and George Wilson – are all on a par with just about any “B” movie star of the era. Wilson in particular seems like he could have had a decent career in character roles if he had wanted to, although he only appeared in a handful of other features after this.


The direction by John De Bello isn’t especially noteworthy, but he’s a competent, “meat and potatoes” kind of filmmaker. De Bello also handled editing chores, and in that capacity he makes a few cuts that feel a bit abrupt or awkward. Overall, though, the movie flows well, the story is easy to follow, and scenes generally aren’t allowed to run on too long.


Where the movie shines is its script, co-written by De Bello, Costa Dillon, and supporting player J. Stephen Peace. Like the more famous comedy writing trio of Zucker, Abrahams, and Zucker, these guys are all about rapid fire jokes, and there’s no such thing as too stupid or too random. The establishing shot showing a San Francisco trolley with Alcatraz in the background labelled as “New York” could just as easily have turned up in an episode of “Police Squad!” (and for all I know, probably did). There may not be quite as many jokes as in a ZAZ film, and there may not be quite as many really funny ones, either. But that doesn’t mean that ATTACK OF THE KILLER TOMATOES isn’t funny in its own right. And I’d even go so far as to say as a first film, it’s better than ZAZ’s debut KENTUCKY FRIED MOVIE.


Now it does bear mentioning that, this being a comedy made in the seventies, some of the jokes are cringeworthy by modern standards. There are a few instances of mild sexism, a couple questionable jokes about a Japanese scientist, and a pretty tame gay joke that nonetheless might bother some.  Also, the African American disguise expert dresses like Hitler at one point. I’m not really interested in debating whether these jokes are or aren’t offensive, nor as a straight white guy am I really qualified to make that judgment. I just feel potential viewers deserve a head’s up.


Thankfully, the alterations made for the 1995 release have mostly been undone (I’m not sure, but I think a few director’s cut era audio alterations remain). In a change for the better, though, the image quality of the film is clearly an improvement over the print shown on pay cable when I was a kid. It still has that unmistakable graininess of a seventies low budget movie, but to what degree it was possible, the picture has been cleaned up for modern high definition viewing.


Did I mention that this movie is kind of a musical? Aside from the already mentioned, insanely catchy theme song, there are a few instances where characters in the movie burst into song. And the songs are, for the most part, both funny and memorable. The adguy does a number called “The Mindmaker Song” that recalls some of Stan Freberg’s slams at the marketing industry. Soldiers called in to do battle with the tomatoes psych themselves up by singing “The Tomato Stomp”. And Mason Dixon and Lois declare their love for each other in the film’s closing number, “Love Theme From Attack of the Killer Tomatoes”. But perhaps most memorably, although not actually performed by any of the characters, is the faux chart topping hit “Puberty Love”, which I am legally obligated to tell you is sung by future Soundgarden and Pearl Jam drummer Matt Cameron.


Going in, I was fully prepared to have my nostalgic memories tarnished. Surprisingly, though, I found ATTACK OF THE KILLER TOMATOES to hold up fairly well as both a parody of “B” monster movies, and as a political and social satire. Dumb but funny gags like a pair of senior citizens idly watching as a killer tomato rolls by, commenting in a deadpan that, “it got little Timmy”, is my kind of humor. But so are the pointed jabs at the advertising industry, politicians, and the media. Not only that, but the movie kept the attention of my 9-year-old. Some of the jokes were a bit too of their time for him to get, but overall he laughed when he should have, and enjoyed the movie.


As for me… no, it’s not up there with STAR WARS anymore. Hell, I don’t even put STAR WARS on that high a pedestal these days. But for a low budget movie made from genuine love and passion, ATTACK OF THE KILLER TOMATOES delivers the groceries. 3 out of 4 stars.
Posted by Bob Ignizio at 12:00 AM