Singing the praises of Satan (the band, that is) 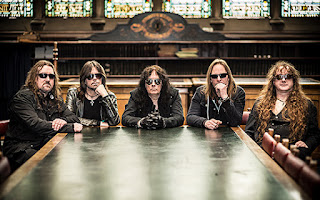 While so-called “hair metal” tends to get most of the attention when one talks about hard rock in the late seventies into the eighties, it was by no means the only major stylistic movement in heavy rock at the time. Arguably just as important, if not moreso, was the New Wave of British Heavy Metal. Perhaps best exemplified by Iron Maiden and Motorhead, the movement also included Def Leppard, who despite often being lumped in with the hair bands started out as part of the NWOBHM before polishing their image and sound.

But for every Def Leppard and Iron Maiden who found mainstream success, and even lesser-known but influential bands like “Heads” Motor and Diamond, there are at least a half dozen also-rans who played a few gigs, put out a record or two, and then largely vanished into obscurity to be remembered only by the most die-hard of headbangers and record collectors. Satan were just such a band.

After releasing the excellent debut album ‘Court in the Act’ in 1983, Satan would go on to have an incredibly convoluted history even by heavy metal standards. There were frequent lineup changes, and a brief flirtation with a more commercial sound. But surely the most damaging blow to the band’s momentum was their decision to change names several times – from Satan to Blind Fury, then back to Satan again before finally (so it seemed) taking on the moniker of Pariah, all within the span of a decade. The group then sat out most of the nineties, returning for one last album as Pariah in 1998 before calling it a day.

Ah, but Satan’s story wasn’t over just yet. The lineup of the band responsible for ‘Court in the Act’ reunited for a one-off show in 2004. That performance went so well that the band quickly rushed off to write and record a comeback album in… 2013.

Oddly enough, though, Satan’s string of questionable decisions and bad luck seem to have finally turned around. After 2013’s ‘Life Sentence’, they managed to keep the same name and lineup for 2015’s ‘Atom by Atom’ and 2018’s ‘Cruel Magic’. And while many decades-old bands trying to mount a comeback either coast on nostalgia for the old stuff or put out new material that falls well short of their classics, Satan may well be a better band now than they were in the eighties. 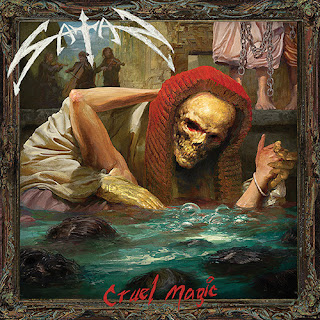 Not only is ‘Cruel Magic’ arguably better than any of Satan’s previous albums, I’d go so far as to say it’s a better (and heavier) record than anything Iron Maiden have released since at least 1987’s ‘Seventh Son of a Seventh Son’. It’s the songwriting that makes the difference, with killer riffs and a pounding rhythm section providing the foundation for ballsy yet melodic vocals delivering lyrics that don’t make me feel like I’m losing IQ points. It’s all wrapped up slickly with strong production that manages to sound contemporary without sacrificing the band’s classic sound. And whether it’s because he can’t pull it off as easily now, or because he knows it just doesn’t fly with modern audiences, vocalist Brian Ross has largely abandoned the occasional falsetto vocals fans may remember from the ‘Court in the Act’ days, which is a plus in my book.

The band was supposed to hit the road in America this spring headlining a four-band bill supported by younger American bands Night Demon, Haunt, and Bewitcher. Like so much else, that has been put on ice by the coronavirus pandemic we’re all currently dealing with. Hopefully the tour will be rescheduled soon. In the meantime, consider buying some merch from Satan (it won’t cost you your soul) to let them know we’re all hoping they reschedule their tour soon. And maybe buy something from the other bands who were on the bill as well, as they’re all great in my book.