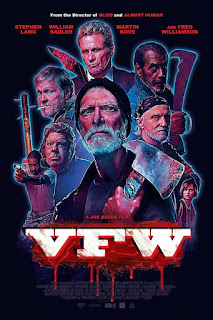 Filmmaker Joe Begos seems to be following the old saw, “if it ain’t broke, don’t fix it,” with his latest film VFW. The film primarily takes its cues from John Carpenter’s 1976 siege action film ASSAULT ON PRECINCT 13. Instead of having his punk rock thugs attack a police station, though, Begos pits them against a band of mostly senior citizen bad-asses who just happen to be hanging out at the local VFW hall across the street from punk central.

VFW spends a decent amount of time establishing its characters and their situation, but makes sure to get to the violent action before losing the eyeballs of today’s attention challenged audiences. And once the action starts, it doesn’t let up.


The color palette and soundtrack are pure eighties, and the special effects are mostly old school, too. So if you’re one of those people pining for the good old days of pracital effects maestros like Savini, Bottin, and Baker, you should appreciate the work of special effects supervisor Bob Trevino and his crew here. They certainly don’t skimp on the blood and gore.

But while the effects are a welcome trip down exploitation memory lane, they aren’t the only reason to watch this film. Begos is a solid director who has been steadily building up a decent body of work, improving with each film. And he’s assembled a first rate cast of older B movie stars to help realize his vision. On the side of the good guys, character actor Stephen Lang shines in the lead role. He’s ably supported by such luminaries as William Sadler, Fred Williamson, and George Wendt. Newcomers Sierra McCormick and Tom Williamson acquit themselves nicely, as well. As for the villains, Travis Hammer is about as nasty a gang leader as you could want, while Dora Madison (star of Begos’ BLISS) exudes menace as his right hand woman.

To be clear, this is not a great movie. Neither were a lot of the eighties schlockfests that I and others still hold dear in their hearts. But VFW most certainly is a well-made, well-acted, and most importantly FUN violent action movie that knows its audience. Sure, it’s heavily indebted to its influences, but not so much as to feel redundant or unnecessary. So if you’re already a fan of Carpenter’s ASSAULT and other violent seventies/eighties action flicks like THE EXTERMINATOR and ARMED RESPONSE, this should be right up your alley.
Posted by Bob Ignizio at 12:00 AM