A housewife finds control through a strange habit in 'Swallow' 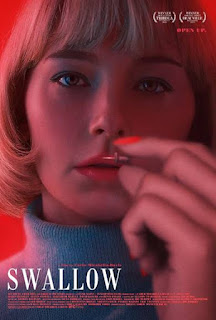 Depicted as the stereotypical upper-class housewife, it would seem as though Hunter (Haley Bennett) has everything she could want from life. She lives in a nice house, has a good looking and seemingly considerate husband in the person of Richie (Austin Stowell), and wants for nothing material.

But in Carlo Mirabella-Davis’s SWALLOW, what some would consider the American dream is far from it. Hunter’s day to day life offers little opportunity for fulfillment beyond decorating her home. And it turns out her seemingly perfect husband is kind of a douche. He’s not physically abusive, but he has little if any interest in his wife’s thoughts and opinions.

The only other people in Hunter’s life are her in-laws, who at best see her as an extension of their son and not as a real person. Richie’s dad (David Rasche) barely acknowledges Hunter’s existence. Richie’s mother (Elizabeth Marvel), on the other hand, makes passive aggressive comments and suggestions to her daughter-in-law. Hunter’s own parents are notable by their absence, and if she has any friends, we don’t see them.


To fill the void in her soul, Hunter begins eating things. Things that one isn’t supposed to eat. At first, just a small marble. When it passes through her harmlessly, she fishes it out of the toilet, cleans it off, and saves it like a prize. Other items she consumes, like a thumbtack, prove more difficult. Still, she manages to keep her compulsion a secret for a time.

That changes when Hunter becomes pregnant. When she and Richie go in for an ultrasound, the imaging picks up more inside Hunter than just a fetus. Richie is furious at first but calms down when Hunter agrees to see a psychiatrist (Luna Lauren Vélez). His general assholish behavior continues, though, with some egregious betrayals of trust.

SWALLOW wants to be an insightful commentary on patriarchal society in the form of an offbeat drama/thriller that uses symbolism and metaphor to convey its themes. Unfortunately it doesn't seem to trust its audience to pick up on that, and winds up spelling everything out in all caps just to be safe. For example, it’s obvious that Hunter engages in her compulsion to feel in control, but the movie still feels the need to state it explicitly in a ham-fisted manner.

There’s also not much depth to either story or theme here. And even calling the principals “characters” feels too generous for such poorly fleshed out stereotypes. Hunter is a cypher, Richie and her in-laws are cartoonish assholes. I guess we’re supposed to believe Hunter and Richie were in love at some point in time, yet we’re never given anything to show why that should be the case.

There are also scenes in the film that are so awkward that you have to wonder if Mirabella-Davis knows how real-life works. In particular, a scene late in the film where Hunter confronts someone from her past at a party comes off as almost comically absurd.

Despite these criticisms, SWALLOW isn’t all bad. It’s a nice looking, well made, and skillfully acted film that wants to say something about an important and relevant issue. But all that talent and all those good intentions are marshalled in service of a script that feels more like a synopsis than a fully fleshed out screenplay.
Posted by Bob Ignizio at 12:00 AM