It's Midnight's time with 'Rebirth By Blasphemy' 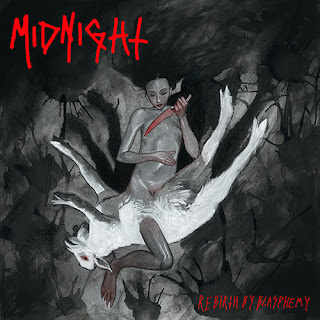 For Cleveland band Midnight’s main-man Athenor, heavy metal is a part of him. It flows in his veins. Long before people started throwing around terms like “New Wave of Traditional Heavy Metal”, Athenor (aka Jamie Walters) was playing this kind of stuff in bands like Boulder, Destructor, and Abudullah. Only now, with the power of Metal Blade Records backing him up, he can finally bring his brand of filth-flavored thrash to a wider audience on his latest release, REBIRTH BY BLASPHEMY.

While Midnight’s sound most obviously recalls proto black metal bands like Venom and early Bathory, influences from classic metal artists like Judas Priest, Motorhead, and Iron Maiden ensure there’s a catchiness and accessibility here that can appeal to a somewhat wider audience. Not that you should expect to hear Midnight on mainstream radio anytime soon, especially given Athenor’s penchant for lyrical sleaze.

Aside from the fact that there are actual hooks to be found amidst the aural assault, Midnight is also refreshingly willing to mix up the particular mode of their attack. Undoubtedly it’s the fast paced ragers like the title track and “Fucking Speed and Darkness” that will grab your attention at first. But mid paced numbers like “Rising Scum” and “Warning From the Reaper”, which recall classic anthems like “United” by Judas Priest or Venom’s “In League With Satan,” rock just as hard and ensure that the album doesn’t fall into the trap of sounding like one long song.

REBIRTH BY BLASPHEMY clocks in at just under 35 minutes in 10 tracks, enough to leave you satisfied without overstaying its welcome. The production is powerful and professional, with a clear mix that lets everything come through without sacrificing rawness. In short, it’s an all killer, no filler collection of straight up heavy metal.

Buy your copy of this album at your local record shop if you can, or order online from bandcamp.
Posted by Bob Ignizio at 2:39 PM