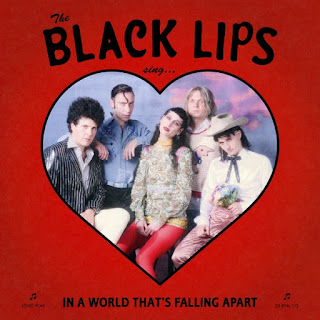 Atlanta’s Black Lips have strayed from the psychedelic garage punk they’re best known for in the past, but usually just for a song or two. However, their latest album, ‘Sing in a World That’s Falling Apart’, is almost entirely a journey into country and other varieties of Americana, albeit one still filtered through the Lips’ eccentricities. The results are mixed.

Album opener “Hooker Jon” is a catchy fuzzed-out blues rocker about the seamier side of life that eases fans into this roots rock experiment. It’s followed by the steel guitar flavored “Chainsaw” and the up-tempo shit-kicker “Rumbler”, both of which move into more countrified territory to nice effect. And ballads like “Gentleman” and “Georgia” recall the Rolling Stones’ forays into country music.

Other songs are less successful. The rock n roller “Angola Rodeo” brings the tempo back up and highlights the sax playing of Zumi Rosow, but never quite catches fire. “Odelia” is probably as close as the Lips come to their classic sound on this record, but the exaggerated twang in the vocals feels a bit forced, as if they’re trying too hard to make the song fit the overall concept of the album. And while “Dishonest Men” and “Live Fast, Die Slow” show the band’s psychedelic side, they feel like throwaways.

Weirdo rockers Ween took a similar detour to Nashville with their 1996 ’12 Golden Country Greats’ album, but embraced the genre more fully with better and more authentic results. By contrast, ‘Sing in a World That’s Falling Apart’, while it has its high points, at times sounds like a novelty album. I admire the band’s desire to try new things, and the album has grown on me with repeated listens. I’m still a long way from giving it a full-throated endorsement, though.

At the very least, it should be interesting to see how this material fares in a live setting, which I’ll be doing when Black Lips play the Beachland Ballroom on Wednesday March 4th. Poppy Jean Crawford and Leaf Borbie & the Family Tree open.
Posted by Bob Ignizio at 12:00 AM