Hollywood still thinks the suburbs are weird in 'Greener Grass' 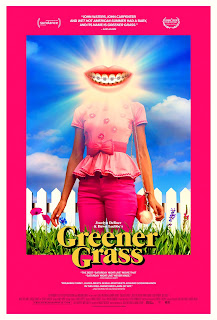 Everyone in the pastel world of GREENER GRASS seems blandly happy, but (shocker) there’s a darkness underneath. Hollywood has given us similar visions of twisted suburbia in films like EDWARD SCISSORHANDS, THE BURBS, and BLUE VELVET. But writers/directors Jocelyn DeBoer and Dawn Luebbe distinguish their film with a comically surreal flavor of their own. “Jokes” like having housewife Jill (DeBoer) offer up her new baby to fellow soccer mom Lisa (Luebbe) as though it were simply good manners to do so display a level of matter of fact weirdness that recalls Luis Bunuel.

One can’t help but admire the degree to which both cast and crew commit to the film’s aesthetic and tone, and the skill with which they pull it off. In an era where most films strive for a kind of bland realism, even when dealing with the patently unreal, it’s nice to see a movie that couldn’t care less about plausibility, and yet still feels relatable in a sense. And while it can be a bit too cutesy and deadpan for its own good at times, there are some truly inspired moments of absurdist humor to be savored in GREENER GRASS.

The burbs certainly warrant a bit of satire now and then. Speaking as one who grew up there, they can be a place of conformity, vapidity, and banality. And as much of a cliché as it may be, there’s always a darker side to this version of the American dream. That said, I’m not sure GREENER GRASS has much in the way of new insight on the subject. And like so many other films that poke fun at the burbs, it feels as if it were made by people on the outside looking in (and down) rather than by filmmakers whose viewpoint was informed by a life spent there.

Objectively, GREENER GRASS is a well-made and acted film, and if the laughs don't exactly come fast and furious, there are enough big ones to be had by those who vibe with its oddball sense of humor to warrant a viewing. I’m not sure I’d go so far as some reviewers and predict cult classic status just yet, but who knows? Only time will tell. For my part, I found myself appreciating the vision, and there were certainly aspoects I liked. Not enough to totally win me over, but enough to make me wish it had.
Posted by Bob Ignizio at 2:59 PM