[I LOST MY BODY screens Thursday January 30th at 6:45 pm and Friday January 31st at 9:35 pm at the Cleveland Cinematheque.] 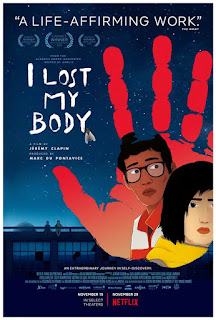 Seems like every year, the Oscars nominate one film in the Best Animated Feature category that is original, innovative, geared towards adults, and (usually) made in a non-English speaking country. If the last decade or so is any indication, it’s not going to win, but hey, at least they made one token attempt to show people animation isn’t just for kids, right?  This year, that film is I LOST MY BODY, co-written by AMELIE screenwriter Guillaume Laurant (adapted from his novel) and the film’s director, Jérémy Clapin, making his feature length debut.

I LOST MY BODY cuts back and forth between a severed hand trying to find its way back to its owner, and the life story of said owner. The hand’s journey is presented in fantastical and macabre fashion, while the life story of the protagonist is depicted in a more grounded and philosophical way. And yet the two parts blend together to make a perfect whole. Yeah, it’s a bit weird, but certainly not inaccessible.

Heck, you want to sell this movie to the mainstream public? Retitle it “Addams Family Origins: Thing”. That’s how the old school exploitation movie distributors would have done it. And dammit, it would play just fine like that without changing anything else. Okay, maybe add a hastily animated epilogue where we see the hand approaching the iconic Addams house if you feel like it has to be spelled out. Hell, it probably would have made Addams fans happier than the animated feature they did get this past year. But does anyone ever ask for my ideas? No.

But I digress. Bottom line, I LOST MY BODY is a damn fine animated feature. Yeah, it’s a bit arty and weird, but it also has a message about accepting and growing from the adversities one faces in life that should resonate with a general audience.

Those who appreciate animation as an artform should see this on the big screen, and thanks to the Cleveland Cinematheque you have a couple chances to do just that this week. Or if you’d rather stay home, you can also check it out on Netflix, which offers this originally French language film in a range of audio and subtitle languages that some may prefer.
Posted by Bob Ignizio at 1:29 PM