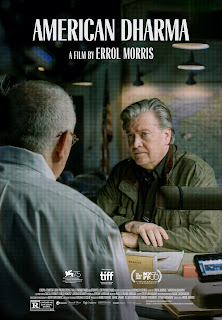 A documentary about Steve Bannon probably seems like an odd choice to review for Utter Trash. I could be snarky and justify it by saying that Steve Bannon is utter trash, but that would be beneath me. No, the real reason I’m reviewing AMERICAN DHARMA is because it was directed by Errol Morris, the filmmaker responsible for some of my favorite documentaries. And since this is my blog, I get to do what I want, dammit!


I may not care much for Bannon, but there’s no denying he’s an interesting figure. And if anyone could make a good film out of such a despicable guy, I figured it would be Morris. After all, he pulled the same thing off with such questionable individuals as Fred A. Leuchter, Jr. (MR. DEATH) and Robert S. MacNamara (THE FOG OF WAR). Both of those subjects proved to be forthcoming and open in their interviews with Morris. But Leuchter was frankly kind of naïve when it came to revealing himself, and MacNamara was looking back on his career with regrets he wanted to get off his chest. Neither of those things is true of Bannon.

The conceit here is simple – Morris sits down with Bannon face-to-face and asks him questions. There's never any question that Morris disagrees strongly with his subject’s worldview, but he interviews him respectfully. Too respectfully, to be honest.


Morris uses after-the-fact film clips to offer counterpoints to some of Bannon’s more questionable statements, and that provides a few chuckles as well as drawing attention to Bannon's more obvious hypocrisies. But Morris is reticent to push back in the actual interview, often letting Bannon just slide on evasive or non-answers.  It’s this timidity that keeps AMERICAN DHARMA from being as important and insightful as Morris’ best work, even if it’s not without interest. (2 ½ out of 4 stars)
Posted by Bob Ignizio at 12:00 AM