'Atlantics' is both deep and eerie 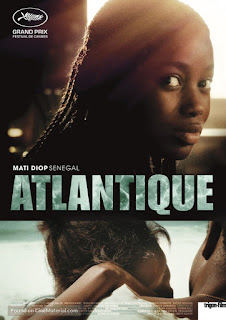 ATLANTICS (Atlantique) tells the story of Ada (Mame Bineta Sane), a young woman living in Dakar, Senegal. She is in love with Souleiman (Ibrahima Traoré), one of the construction workers erecting a luxury skyscraper on the seacoast, but is betrothed to the less personable but more financially stable Omar (Babacar Sylla). It would seem Ada has a decision to make, but the choice is taken out of her hands.

Soulemain and the rest of the workers haven’t been paid in 3 months. Hoping to find better prospects, they head out to sea. Ada doesn’t find out until after the fact, and is understandably upset. But with her nuptials fast approaching, she can’t exactly talk about her feelings openly, even when it begins to seem likely that Souleiman and the others have died at sea.

And so the wedding eventually takes place, although it’s obvious Ada’s heart isn’t in it. Then things take a turn for the weird. At the reception, some of the guests claim to have seen Souleiman. And that night, the wedding bed is set on fire.

Soulemain becomes police detective Issa’s (Amadou Mbow) prime suspect, Ada’s protestations that she doesn’t know her lover's whereabouts falling on deaf ears. And the more obsessed Issa becomes with the case, the more he suffers from a mysterious illness. Meanwhile, the owner of the skyscraper finds himself visited by the widows and girlfriends of the workers, who are seemingly possessed by the spirits of the missing men.

Director Mati Diop, who also co-wrote the screenplay with Olivier Demangel, infuses her directorial debut with a supernatural atmosphere throughout. The vibe is enhanced by Claire Mathon’s ethereal cinematography and the eerie synthesizer score by Fatima Al Qadiri. One hesitates to call it a horror movie per se, but it is “horror adjacent” - there may not be any jump scares or grisly murders, but both love and vengeance come from beyond the grave. And the effectively chilling imagery of the possessed, with their whited-out eyes, is certainly the stuff of horror.

The way ATLANTICS unfolds is a bit of a slow burn, but that suits it well. And while the surface tale offers plenty of drama, romance, and eeriness with its plot, at its core it’s really about how loss transforms Ada into a more capable and independent woman. The social commentary about how the wealthy exploit the workers is, of course, also there. But it feels like more of a secondary, if complimentary, theme.

The performances are subdued and naturalistic for the most part. Sylla’s portrayal of Omar is something of an exception, with his character coming off like a rom-com douche. But that’s more down to the writing than his performance, and thankfully the part is a relatively minor one. The leads (Sane, Traoré, and Mbow) are written and played much more believably. Sane in particular shines as her Ada transforms from an insecure girl being pushed about by the desires of others, into a woman who begins taking charge of her own life.

Some may feel there ought to be something more to ATLANTICS. It’s certainly a complaint some critics have raised, even in otherwise positive reviews of the film. While it’s an understandable criticism, it’s not one I agree with. Given its pacing, tone, and themes, a soft and somewhat uncertain landing feels right for the film. 3 ½ out of 4 stars.
Posted by Bob Ignizio at 12:07 PM