Return to the Microverse: Revisiting and reviewing Micronauts Issue 1 (1978) 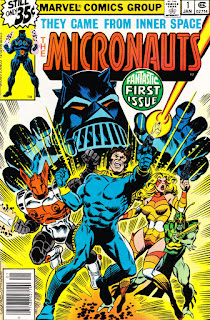 Recently, my local comic book shop Carol & John’s Comics came across a stash of seventies and eighties comics. Like multiple copies of random single issues. And they’ve been putting these quirky finds up for sale, and for substantially less than what the Comic Book Price Guide says they're worth.

Regardless of their monetary value or lack thereof, these comics have great nostalgia value for someone my age. In particular, I was pleasantly surprised to see several issues of Marvel’s Micronauts comic among the offerings. I was a huge fan of this series as a kid, but haven't owned a copy of these comics in years. No way could I pass these up.


According to Wikipedia, Micronauts started out in 1974 as a Japanese toy line called Microman. The toys were later imported to America by Mego under the Micronauts name from 1976 to 1980. Marvel licensed the property for comics in 1978 after writer Bill Mantlo saw his kids playing with the toys and was inspired to come up with a backstory for them.

Despite being a licensed property, everything but a few of the character designs in the series sprang from its creators' heads. Hell, 3 of the 4 main characters in the book had little, if anything, to do with the toy line. 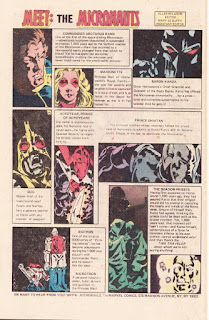 Micronaut leader Arcturus Rann was occasionally referred to as Space Glider, one of the Micronaut toys, in early issues. For all intents and purposes, though, he was an original character. He wore the special glider wings his toy counterpart came with, as did other characters, but that's where the similarities ended.

Bug, a humanoid insect who filled the quirky sidekick role, was in theory based on a Micronaut toy called Galactic Warrior. Since his design was so drastically different from the toy, however, after a few issues the series stopped making reference to Bug’s toy counterpart, which allowed Marvel to retain rights to the character. Ditto with regards to Rann and the Space Glider moniker.

Female lead Princess Marionette, Mari for short, was completely unconnected to the toy line - all the Micronaut toys were either male or asexual robots. Mari, however, was a scantily clad sci-fi heroine in the BARBARELLA mold.

The fourth and final main character was the one most closely based on the toys. Acroyear was an armored, axe-weilding badass, essentially the “tank” of the group, and his comic book version looks identical to the toy that inspired it.

The plot of the first issue is your standard “get the group together” story. There’s a revolution on the planet Homeworld, with the evil Baron Karza sending his dog soldiers out to hunt down the royal family. Karza holds sway over the populace through a mix of science, magic, and religion. He has developed a process that allows him to resurrect anyone who dies. All they have to do to achieve eternal life is accept his authoritarian rule, which most see as a decent enough trade-off.

Of course, not everyone wants to go along with Karza, our heroes among them. Karza has them imprisoned and forces them to fight in a gladiator style arena, but they manage to escape not only Karza’s clutches, but the boundaries of the Microverse itself. Where do they end up? Why earth, or course. To be continued.

To be sure, it’s a fairly safe and familiar setup, and the characters are one dimensional. I think what made the series interesting to me as a kid, aside from the fact that it was based on toys I already loved, was that Micronauts had a bit of an edge to it. 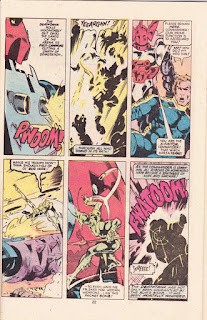 Micronauts was still within the boundaries set by the Comics Code Authority, which at the time was all but mandatory if a publisher wanted their book to be available on spinner racks in convenience stores across America. But it pushed the level of violence about as far as it could. There isn’t any overt gore, but the comic doesn’t shy away from killing numerous minor characters in just its first issue.

And then there’s Marionette. The character is written as smart and capable, but at the same time clearly drawn with the male gaze in mind. She has the usual impossible body proportions of a female comics character, which are accentuated by a form-fitting costume that leaves little to the imagination. Still, artist Michael Golden takes no chances, making sure to reveal as much of her posterior as the Comics Code would allow. So, for better or worse, she’s in line with contemporary jiggle TV heroines like Charlie’s Angels, and the heroines of Roger Corman’s drive-in action films of the era who awkwardly tried to walk a line between sexploitation and feminism.

The writing by Bill Mantlo is very much in the Marvel “house style” of the time, with lots of exposition and hyperbole. But even if the dialogue and narration panels get a bit cheesy, it’s kind of fun to read fevered, pulpy passages like, “The ship is old… pitted and pocked by the ravages of time and space! Yet its return was clearly foretold on the ancient mission charts… and it is only fitting that there should be an honor guard to greet it!”

Word balloons aside, the story moves along briskly if predictably, setting up multiple characters and plot points efficiently while still delivering plenty of action. A modern comic would probably spread this out over 3 or 4 issues.

The artwork by Michael Golden (embellished by inker Josef Rubenstein) is distinctive, but often lacking in background details. There are a few interesting choices in the way the panels are laid out, but for the most part Golden keeps things basic and easy to follow.

Modern coloring techniques have come a long way since the seventies, and by today’s standards the coloring by Glynis Wein looks overly simplistic. It doesn’t help that the poor quality paper and reproduction techniques of the time tend to make things appear a bit blurry. You can’t really blame Glynis. It’s just how comics looked at the time. But to modern eyes it's a bit rough.

Along with Godzilla and Shogun Warriors, two other licensed properties Marvel acquired in the late seventies, Micronauts fueled my early love of comics even more than superheroes like Spider-Man or Batman. I actually made an effort to get every issue when it came out, and I even subscribed (by actual mail) when Micronauts went direct sales only with its 38th issue in 1982. So I probably have more nostalgia invested in this book than the average comics fan.

With that in mind, I gotta’ be real here. Reading this first issue as an adult was a fun trip back in time, but it’s not some lost classic begging for rediscovery. I got a kick revisiting these characters, and now that I managed to pick up a good chunk of the series, I’ll probably do my best to track down the rest –there were only 59 issues, 2 annuals, and an X-Men/Micronauts miniseries*. But that’s me and my nostalgia, and if you don’t already have the same kind of warm fuzzy spot in your heart for Micronauts either in toy or comics form, I don’t know that there’s much here.

*Yes, the X-Men teamed up with the Micronauts. So did S.H.I.E.L.D., Man-Thing, and the Fantastic Four. Bug even went on to join the Guardians of the Galaxy at one point. And the world in which all the Micronauts existed, the Microverse, remains a part of the Marvel Universe to this day. It even figured into the Marvel films under the alternate name “the Quantum Realm”. And it’s all technically still “canon”. When Marvel licenses your toy for a comic book, you get the full treatment.
Posted by Bob Ignizio at 9:11 PM