It May Be 'First Love', But First They Have To Survive. 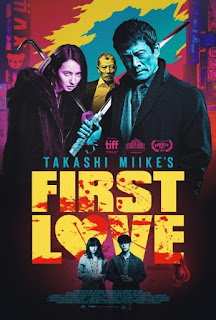 As FIRST LOVE (Hatsukoi) begins, a severed head rolls into the middle of the street and blinks in shock. It’s the kind of moment one expects from prolific Japanese cult director Takashi Miike (ICHI THE KILLER, GOZU, 13 ASSASSINS, HARA-KIRI: DEATH OF A SAMURAI, and so many others).


Written by frequent Miike collaborator Masa Nakamura, FIRST LOVE crams a small army of characters and just about every noir and yakuza movie trope one can think of into its script. Double crosses and twists abound, but the complex plot of can be boiled down thusly: Leo (Masataka Kubota), a boxer told that he is dying from a brain tumor, saves Monica (Sakurako Konishi), a prostitute and drug addict, from corrupt police officer Otomo (Nao Ōmori), who is trying to kill her as part of a scheme to steal drugs from the Yakuza.


The unlikely couple then find themselves pursued not just by the crooked cop, but by various factions including the crooked cop’s Yakuza partner Kase (Shōta Sometani) and the girlfriend of a dead drug dealer out for revenge (Becky – yes, just the one name). There’s also a one-armed swordsman, a female assassin, and at least a half dozen henchmen and minor players caught up in the insanity.


Everyone wants the drugs, and some also want Monica dead. Since he’s going to die anyway, Leo doesn’t give a second thought to doing whatever it takes to protect her.


Despite the film’s title implying that the love story would be its central focus, Leo and Monica often take a backseat to action and intrigue involving other characters. Still, FIRST LOVE always swings back to them eventually, and it is this couple who provide the audience with someone they can root for.


While FIRST LOVE still bears Miike’s distinctive and eccentric stamp, it’s not as over the top and disturbing as his best-known cult works. It’s still violent and weird, but not so violent and weird as to drive away viewers accustomed to more mainstream fare.  Nor is it as dry and serious as some of his recent, more sober fare like HARI-KIRI. The core drama is taken seriously and presented in a relatively straight-forward crime film manner, but there’s enough quirkiness to insure it’s anything but typical. 3 ½ out of 4 stars.
Posted by Bob Ignizio at 11:25 AM