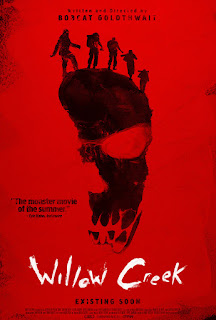 So this one has been out for a while, but I’ve held off watching it until now. I like Bobcat Goldthwait as a director, and for my money SHAKES THE CLOWN is one of the finest comedies ever made. Subsequent films like WORLD’S GREATEST DAD and GOD BLESS AMERICA were intriguing dark comedies as well, even if I didn’t love them quite as much. So I’m generally interested in seeing anything the guy makes. And yet, the idea of Goldthwait directing a found footage horror movie about Bigfoot just didn’t grab me.

Turns out, my instincts were wrong on this one, as WILLOW CREEK is one of the better found-footage horror films to come out in the wake of THE BLAIR WITCH PROJECT.

Our protagonists are a young couple – aspiring actress Kelly (Alexie Gilmore) and her bigfoot hunting boyfriend Jim (Bryce Johnson). Despite their professions and obsessions, these two come off as more likeable and relatable than most found footage horror characters. The fact that we aren’t rooting for them to die goes a long way, since the movie spends a good bit of time just hanging out with them on their vacation to Bigfoot Country before anything scary starts to happen.

At first we’re inclined, like Kelly, to laugh at Jim’s goofy beliefs. Certainly most of the other believers we see Jim interview are a little silly, including a couple different Bigfoot balladeers. Of course this being a horror film, eventually it is going to have to deliver. And deliver it does. The final minutes of WILLOW CREEK are effectively scary and disturbing. Goldthwait may be best known for his comedies, however dark, but there’s nothing funny about this film’s climax.

WILLOW CREEK falls on the more polished and professional looking side of found footage movies. And if there’s one thing Goldthwait carries over from his background in comedy, it’s a sense of timing. It’s certainly good enough that I’m going to seek out Goldthwait’s horror anthology series Misfits and Monsters now.
Posted by Bob Ignizio at 12:00 AM