31 Days of Halloween: Three From Hell 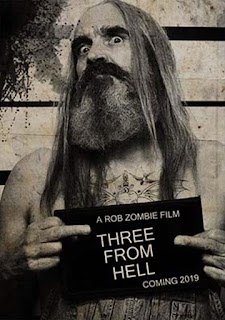 It’s understandable that Rob Zombie couldn’t resist going back to the well one more time. Since the critical and commercial success of THE DEVIL’S REJECTS and the more mixed but still profitable response to his remake of HALLOWEEN, subsequent projects (HALLOWEEN 2, THE LORDS OF SALEM, THE HAUNTED WORLD OF EL SUPERBEASTO, 31) haven’t fared nearly as well. So why not get the old gang back together and return to the franchise that made Zombie an above the title name in horror?


Despite having been pelted with a hail of gunfire while Lynard Skynard’s “Freebird” blared on the soundtrack, the murderous Firefly clan of THE DEVIL’S REJECTS somehow survived. They did not, however, escape. After recovering from their wounds, the family are tried and sentenced. They also rise to infamy and even outright hero worship among some segments of society in a sequence that feels more than a little reminiscent of NATURAL BORN KILLERS.

Captain Spaulding (Sid Haig) is sentenced to lethal injection, while Baby (Sherri Moon Zombie) and Otis (Bill Mosely) are given life sentences. As it turns out there’s  another family member we haven’t met before, Otis’ half brother Winslow (Richard Brake). With Winslow’s help, the family of psychopaths escapes and sets out on a brutal spree of revenge and random violence.


Also a whole lot of talking, much of it involving repeated use of the word “fuck” and its variations.


I mean, if you want to watch 2 hours of Bill Mosely and Sherri Moon Zombie talking about random stuff and saying "fuck" a lot, stopping to kill some rando every now and then, all leading up to a final showdown with a character who doesn't show up until the third act and, when he does, doesn’t feel like a threat or even have an interesting persona, then this might be the movie for you. Otherwise I'd say take a pass. THE DEVIL’S REJECTS ended perfectly. There was no reason for this movie to exist, and Zombie doesn't even bother trying to give us one.


Now maybe, just maybe, if this clunky, nearly two hour film had been edited more tightly it would have helped. Bill Mosely at least gives his usual convincing performance as Otis. Sid Haig gets to go out respectably in what turned out to be his final film, and while I don’t think he could have saved the movie had he been in good enough health to play the larger role originally intended for him, more Sid Haig is never a bad thing. And really, you can’t fault any of the cast, all of whom do the best they can with a clunker of a script.


No doubt the die hard Rob Zombie fans will be happy just to see their beloved antiheroes once again. But objectively speaking, 3 FROM HELL just isn’t a very good film. There’s no real arc to it, the themes are at best a rehash of ideas Zombie did better in REJECTS, and compared to the powerful ending of the previous film, this one just sort of fizzles out.
Posted by Bob Ignizio at 12:00 AM