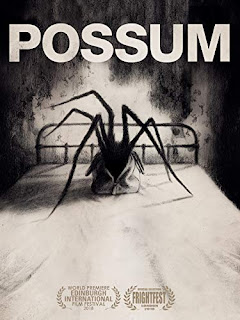 Matthew Holness already had major horror cred in my book for writing and starring in the amazing Garth Marenghi’s Dark Place, which he co-created with Richard Ayoade. But where that program had a laugh mocking the sort of low budget schlock one might have seen on eighties British television, and poking fun at pompous horror writers who take themselves a bit too seriously, there’s precious little to laugh abut in POSSUM, Holness’ feature film debut.


POSSUM is a textbook case of quiet horror, and all the more disturbing because of it. The plot is that Philip (Sean Harris), a children’s puppeteer whose twisted dark stories and horrific puppet ensure he doesn’t get too many referrals, returns to the run-down apartment where he was raised by his abusive uncle Maurice (Alun Armstrong). It is not a happy family reunion.

Meanwhile, there’s been a rash of disappearances in the area. Most recently, a young man Philip sat across from on his train ride home. Philip is also trying to rid himself of his disturbing puppet, as much a purging of his own psychological baggage as anything, but finds it to be exceedingly difficult. Even when he thinks he’s gotten rid of the thing, it keeps coming back.


This is one of those psychological horror movies that relies on mood and subtext more than any overt horrors, although there are some of those. I’m sure a good many viewers will find it slow and boring. This isn’t the kind of movie that trades in jump scares and gore. It’s more interested in chills and dark, disturbing notions bubbling up from the subconscious, and in that regard it is very much effective.
Posted by Bob Ignizio at 12:00 AM