31 Days of Halloween: The Head Hunter 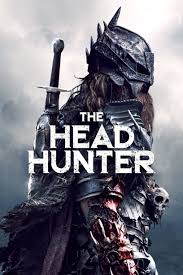 THE HEAD HUNTER pares itself down to one actor, one set (with a bit of outdoor location shooting), and a few very simple effects. To say it’s a minimalist film is perhaps an understatement, but director Jordan Downey (who also co-wrote the screenplay with Kevin Stewart) shows that limitations can be a virtue.

I was reminded of Bela Tarr’s last film, THE TURIN HORSE, in the way that much of THE HEAD HUNTER is comprised of repetition. In that film, we saw an old man and his daughter coming together at the end of each day of drudgery to eat a single baked potato in silence over and over again until it became almost hypnotic. Here we have a medieval warrior (Christopher Rygh) heeding the blow of a horn signifying that monsters are about. He then heads off to do battle with the creatures off-screen, later returning to his tiny stone hovel to heal his wounds and impale the head of his latest kill on the wall. He does this all in hopes of one day finding and killing the monster who killed his daughter.

THE HEAD HUNTER would fit in the sword and sorcery genre as well, but the tone is without a doubt one of horror. It’s a slow burn, to be sure, but eventually it does reach a violent and exciting climax made all the more effective by the build-up and atmosphere. It also helps that the movie is a mere 72 minutes long counting credits. There’s no guarantee that some (perhaps most) viewers still won’t find this boring, especially given the attention spans and expectations of the average movie goer these days. But there is a small audience who will welcome the rawness and simplicity of a film like this, too. And for them, THE HEAD HUNTER will feel like some kind of masterpiece.