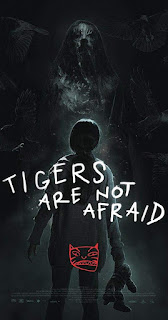 Okay, enough with the walking dead. Real life has more than enough horror, anyway. At least that’s the case in TIGERS ARE NOT AFRAID, in which a group of Mexican orphans are being pursued by violent gangsters who want something the kids have. And if they have to kill the kids to get it, that’s just how it goes.

That probably doesn’t sound like the premise for a horror movie, but when you bring in elements of the fantastic and supernatural, as TIGERS does, it starts to make sense why streaming horror service Shudder picked this one up as an exclusive.

Despite the main cast all being kids, this is most definitely NOT a kid’s movie. Not because of gore or language or nudity, but because it is unflinching in the way it depicts the horrors of the real world. And as in the real world, those horrors are sometimes visited upon children. That may be a deal-breaker for some viewers, regardless of how good the movie is, so I’m putting it out there now.

The movie is exceptionally good, though, so if you can handle a rough emotional ride, give this one a shot. It has a number of genuinely creepy scenes, but at its heart it’s a serious and truthful drama that hits viewers with an emotional wallop far more forceful than any of its jump scares.