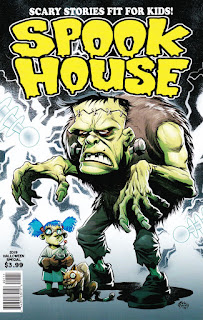 Time for a comic book break. For last year’s 31 Days of Halloween, I reviewed the first issue of ‘Spook House 2’, a four issue anthology miniseries that operated under the concept, “scary stories fit for kids”. This year ‘Spook House’ is back, but sadly only as a one issue Halloween Special. But hey, a little ‘Spook House’ is better than none at all.


The first story this time around features Megaghost, star of his own Albatross comic. In “It’s the Candy Kaiju, Megaghost!”, young magician Martin Magus goes trick-or-treating with his ghostly pals. But his arch enemy Ultra Ghoul has plans to ruin the festivities by unleashing a giant monster made of puked-up candy. Gross? Sure. But it’s the kind of gross that kids love. Gabe Soria’s story features the same blend of humor, horror, and action that makes his regular Megaghost comics must-reads, and Gideon Kendall’s art recalls “Jolly” Jack Davis while still having a personality of its own.

“Goldfish Graveyard” is a black and white PET SEMATARY parody co-written by Eric Powell and Mac Cushing with art by Steve Mannion. It starts off as a ‘Mad’ magazine style parody of the 1989 version of the film, but when the dead goldfish come back to life they’re like H. P. Lovecraft’s Deep Ones crossed with a 1950s juvenile delinquent movie. Lots of kid friendly laughs, and even a moral at the end of the story.


Eric Powell goes solo on “The Grumpiest Goblin”, in which the title monster learns that you get more goodies being nice than you do being a curmudgeon. Plus kids get to learn what a notary does!


Powell also handles both writing and art on the final story, “Lula’s Boxing Match”. Lula is a little girl with a beard and a complete lack of fear, as evidenced by her willingness to step into the ring when a boxer tries to steal business from the circus she works at. There’s a subplot about a pie stealing hobo and his canine companion, and Lula’s pet monster Chimichanga factors in to the action as well. It’s good silly fun, and even if the story is kind of lightweight, Powell’s art is top notch as always.


All in all, this is a fine collection of comics just right for kids (and their parents) to enjoy this Halloween season.
Posted by Bob Ignizio at 12:00 AM