31 Days of Halloween 2019: Scary Stories to Tell in the Dark 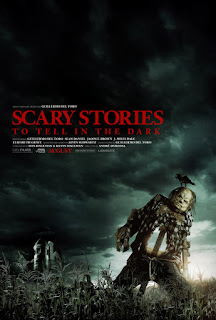 There’s no new cemetery ground being broken in SCARY STORIES TO TELL IN THE DARK, but to a degree that’s part of the appeal. The series of books of the same name by Alvin Schwartz collected various spooky stories and urban legends. The film takes those tales and incorporates them into a fairly standard issue “revenge from beyond the grave” template to deliver a film that favors thrills and chills over violence and gore. But thanks to the skillful direction of André Øvredal (TROLLHUNTER, THE AUTOPSY OF JANE DOE) and a visual aesthetic that takes its cues from the creepy illustrations in the original books, the film finds ways to be scary without being bloody.

The screenplay by brothers Dan and Kevin Hageman (with contributions by producer Guillermo del Toro, Patrick Melton, and Marcus Dunstun) centers around a group of teens in 1968. Stella (Zoe Colletti), Auggie (Gabriel Rush), and Chuck (Austin Zajur) are a trio of outsiders who plan to get revenge on bully Tommy Milner (Austin Abrams) and his toadies. Their plan works, but later they, along with teenage drifter Ramon (Michael Garza), wind up trapped in the neighborhood haunted house.

While searching for a way out, Stella finds the book of cursed ghost stories the home’s former (or maybe no so former) resident supposedly read to children before killing them. The book starts writing new stories, the words appearing on its pages before Stella’s eyes, and before you know it the kids are being stalked by various folkloric horrors. And there doesn’t seem to be any way to stop it.

The way the kids search for answers in the past while trying to stave off their seemingly inevitable deaths recalls FINAL DESTINATION, among other films. But with the current bounty of original arthouse horror films hitting theaters like MIDSOMMAR and THE LIGHTHOUSE, a little old fashioned B-movie creep fest is more than welcome. And with the A-list clout of Guillermo del Toro ensuring the film has a decent budget and a top notch cast and crew, SCARY STORIES TO TELL IN THE DARK may feel familiar, but it never feels cheap.
Posted by Bob Ignizio at 12:00 AM