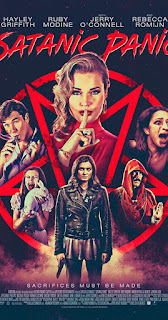 The basic premise of SATANIC PANIC is that the rich are amoral devil worshipers willing to sacrifice anything, even their own children, to hold on to wealth and power. So not a whole lot of suspension of disbelief required. But before we meet the moneyed monsters, we are introduced to our protagonist, the considerably less well-off Sam (Hayley Griffith), a teenage singer/songwriter who just started her first ever job delivering pizzas.

At the end of a tipless shift, Sam agrees to take a delivery out of the pizza shop’s zone in the wealthy Mill Basin section of town. This turns out to be a very bad idea, and not just because the mansion she delivers to doesn’t tip her, either. When Sam gets mad and goes in to demand a tip, she finds herself in the midst of a Satanic ritual. The problem is, the coven’s virgin isn’t one anymore. Sam, however, is, and coven leader Danica (Rebecca Romjin) figures the pizza girl will do in a pinch.

The rest of the film is a blackly comic low budget gorefest as Sam, with the help of Danica’s daughter and original intended sacrifice Judi (Ruby Modine), tries to escape the deranged cultists bent on using her womb as the birthplace for high ranking demon Baphomet.

Although set in our present day, the film has the feel of a late eighties/early nineties low budget horror flick. The special effects appear to be mostly of the old-school practical variety, which is always a plus for this reviewer. The special effects team (Tate Steinsiek and Chris A. Wilks) really go for the gusto, with a couple of scenes in which characters puke up things that should never be puked up (fans of Lucio Fulci will see the maestro’s influence here), and a flying “soul souffle” made out of enchanted and baked organs.

It also helps that the film boasts a solid cast. Romjin in particular makes a fist rate villain. In the lead role, Griffith makes for a likeable and relatable protagonist who manages to be both an unlikely horror hero ala THE EVIL DEAD’s Ash, and a more vulnerable, human character  the audience can empathize with as we learn exactly why she’s still a virgin. No weak spots in the supporting cast, either. I particularly enjoyed Jeff Daniel Phillips delightfully deadpan cultist.

SATANIC PANIC isn’t a great film, but it’s still a lot of fun and knows how to deliver over the top horror comedy without going so far that it becomes unpleasant. It also has something to say and manages to do it without being to preachy or in your face. Far too many low budget horror movies go the easy route and try to be “so bad they’re good”, usually only succeeding on the “so bad” part. SATANIC PANIC tries to be the best movie it can with the resources it has, and for the most part succeeds.
Posted by Bob Ignizio at 12:00 AM