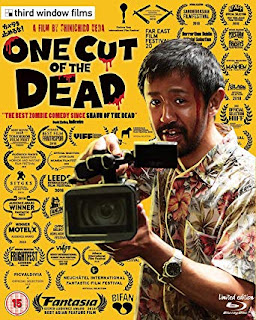 
Speaking of surprises, it’s best if you don’t know too much about this movie. With that in mind, I’m not going to go into much detail on the plot here. All you need to know is that a small film crew have gathered at an abandoned building to shoot a low budget zombie movie. Director (Takayuki Hamatsu) is really pushing his cast to give him authenticity, which seems to be a problem for his female lead (Aika Matsumoto), who even after 42 takes isn’t displaying nearly enough fear while being attacked by her boyfriend turned zombie (Kazuaki Kamiya). That all changes when a real zombie outbreak occurs, and rather than try to help his cast and crew escape, the director forces them to keep filming. It may seem a little typical and a little cheap at first but stick with it.


And that’s all you should know before watching this.


Well, I suppose it’s okay if I tell you the performances are spot on, the direction kinetic and assured, and the twist genuinely surprising and satisfying. If you’re looking for a gorefest, this is pretty tame, but actual writer/director Shin'ichirô Ueda does a good job creating suspense and keeping his audience on its toes. He also manages to deliver a surprisingly uplifting film despite the premise, and he does it without descending into schmaltz. As with THE DEAD DON’T DIE, those looking for something more traditional may be disappointed, but if originality and filmmaking skill are your thing, check this one out. Right now it’s a Shudder exclusive.
Posted by Bob Ignizio at 12:00 AM

Email ThisBlogThis!Share to TwitterShare to FacebookShare to Pinterest
Labels: 31 Days of Halloween 2019, Bob Ignizio, Horror, Movie Reviews, One Cut of the Dead