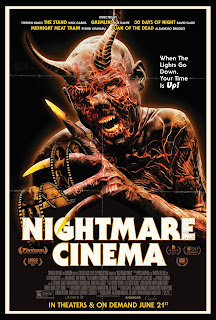 Not many patrons enter the mysterious movie theater in NIGHTMARE CINEMA, but those who do come to regret it. That’s because The Projectionist (Mickey Rourke) doesn’t show just any old movies. The films he shows are personal nightmares ripped straight from the minds of those watching them.

The first moviegoer to get more than they bargained for is a Samantha (Sarah Withers), a young woman who sees herself thrown into what appears to be a by the numbers woodland slasher film in which she is pursued by a killer known as “The Welder” (Eric Nelson). Writer/director Alejandro Brugués (JUAN OF THE DEAD) almost holds off too long on revealing the twist. But when it finally comes, it’s the sort of cheesy, fun surprise you’d expect from an episode of an eighties horror anthology series like Tales From The Crypt or Monsters. B-

The next ticketholders young couple Anna (Zarah Miller) and David (Mark Grossman). Anna has a slight but noticeable scar on her face, and while David says it doesn’t bother him, he nonetheless directs her to see his mother’s plastic surgeon Dr. Leneer (Richard Chamberlain). Director Joe Dante (GREMLINS, THE HOWLING, PIRANHA, etc.), working from a script by Richard Christian Matheson, explores the dark side of plastic surgery in this gleefully gruesome tale. As his fans would expect, Dante directs the segment with style and humor (and includes one of his stock company, Brenda Balaski, in a small role). Like the first segment, this would have been right at home on Tales From the Crypt, even as its social commentary seems more influenced by something like The Twilight Zone. Not great, but reasonably entertaining. B-

Japanese filmmaker Ryûhei Kitamura (VERSUS, THE MIDNIGHT MEAT TRAIN) delivers his trademark over the top violence in a tale of demonic possession at a Catholic boarding school written by Sandra Becerril. This one feels like a feature film shoehorned into a twenty minute segment, with all sorts of inferences and dangling plot threads never followed up on. Notably, at one point the demon implies that the segment’s nomial hero Father Benedict (Maurice Benard) might have been molesting a student. Is this just your run of the mill demonic taunting, or a legitimate charge? The film can’t be bothered to tell us, and in general, Kitamura seems to have no connection with or interest in the religious themes you’d expect a story like this to explore. He just wants to race to the carnage. D

During one of the framing sequences, Rourke’s projectionist says that he collects nightmares. Segment four from Director David Slade (HARD CANDY, 30 DAYS OF NIGHT, lots of TV including the “Bandersnatch” episode of Black Mirror) and co-writer Lawrence C. Connolly perhaps best realizes that concept. Shot in a gritty black and white, it depicts a stressed out mom (Elizabeth Reaser) trying to keep both herself and her two young sons from losing it while waiting in a doctor’s office. As she waits, the world around her slowly becomes deteriorates. There’s no comic book fun here, just raw, psychological horror. B+

Also eschewing the comic book tone is the fifth and final segment from writer/director Mick Garris (THE STAND, the TV version of THE SHINING). Riley (Faly Rakotohavana) is the sole survivor of an armed robbery that takes the life of his mom and dad. Actually, Riley himself “died” for a few minutes before being revived, and can now see spirits who have yet to cross over, including that of his mother (Annabeth Gish). It feels more like a mainstream Hollywood thriller than a horror tale, and a pretty by the numbers one at that. Par for the course with such things, there’s a lot of dumb, but it’s serviceable. C

As for the framing sequence, Rourke seems miscast in the Crypt Keeper type role, conveying neither genuine menace nor true ghoulish glee. His segments hold the parts together, but not particularly well.

In the end, like most anthologies it’s a mixed bag. Not a must see, but one could certainly do worse.
Posted by Bob Ignizio at 11:27 AM