31 Days of Halloween 2019: Incident in a Ghostland

[Once again I'm going to attempt to do a horror(ish) movie review a day for the entire month of October. I've done this the last few years on The Cleveland Movie Blog. Most of the time I succeeded. Other times I didn't. We'll see if I can pull it off this year.]
Review by Bob Ignizio 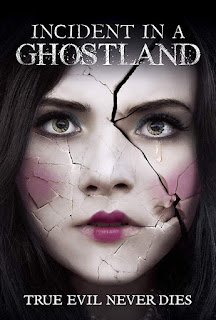 In 2008, Pascal Laugier wrote and directed MARTYRS, a visually stunning, thought provoking, and transgressive horror classic. Laugier was hailed as a new icon of horror cinema. There was an English language remake of MARTYRS, and there was talk that Laugier would helm a remake of his own, of Clive Barker’s HELLRAISER. But the MARTYRS remake fared poorly, and due to disputes with the producers, Laugier left the HELLRAISER remake.

Instead, for his first English language film he made the stylish but disappointing thriller THE TALL MAN in 2012, which deservedly went straight to video. Still, I was hoping INCIDENT IN A GHOSTLAND might be a return to form.


The story begins with Pauline (Mylene Farmer) and her two daughters – Vera (Taylor Hickson as a teen, Anastasia Phillips as an adult) and Beth (Emilia Jones as a teen, Crystal Reed as an adult) – on their way to the old farmhouse they’ve just inherited from Pauline’s crazy Aunt. On the drive there, the women are followed by a creepy candy truck, and Vera can’t resist flipping the truck’s driver off.

With Pauline and her daughters just barely settled in to their new home, the candy truck creeps stage a home invasion. One is a hulking, mentally challenged brute (Rob Archer), the other a trans woman who fills a twisted maternal role (Kevin Power, with the voice of Angela Asher). Things get bad for Pauline and her daughters, but the women fight back and ultimately defeat their attackers. Or do they?

Look, I’m a horror fan, and as such I'm somewhat jaded when it comes to misogynistic violence and general offensiveness. But unlike Laugier’s even more brutal MARTYRS, it doesn’t feel like there’s any deeper reason for the incessant ugliness and cruelty in GHOSTLAND.

And seriously, haven’t we seen enough movies with trans people as monsters? Even if you don’t see it as transphobia, it’s just lazy and unoriginal. Not to mention it begs comparisons with PSYCHO, THE TEXAS CHAIN SAW MASSACRE, and SILENCE OF THE LAMBS, and INCIDENT IN A GHOSTLAND doesn’t come close to measuring up.

But leaving those issues aside, in terms of plot and thematic content there’s not much here that’s fresh or interesting. It reminds me of HAUTE TENSION in the way it puts all its eggs in the twist basket, and has little else to offer beyond that, and a willingness to go for the gusto in terms of gore and violence. I’m sure some will disagree, and maybe even offer more generous interpretations of the ideas Laugier was trying to get across. I’m not saying those people will necessarily be wrong. I’m just saying that for this viewer, INCIDENT IN A GHOSTLAND was a hollow, unpleasant experience.