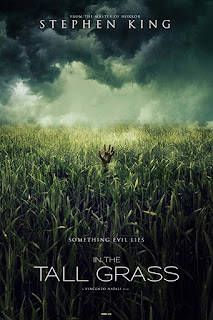 Becky (Laysla De Oliveira) is pregnant, and since her boyfriend Travis (Harrison Gilbertson) isn’t ready to step up and be a dad, she’s decided to give the baby up for adoption. So she and her doofus of a brother Cal (Avery Whitted) head off on a road trip so she can have the baby and give it up for adoption. Along the way, though, they become lost in a field after responding to cries for help from a young boy named Tobin (Will Buie Jr.). Also in the all-encompassing greenery are the boy’s father Ross (Patrick Wilson) and his mom Natalie (Rachel Wilson). Soon, everyone is walking about aimlessly in the field, and as night falls with seemingly no way to escape, things keep getting stranger, and more dangerous.

This is fairly standard-issue Stephen King (even if King co-wrote it with his son, Joe Hill). We’ve got a seemingly mundane menace (the “tall grass” of the title), a mystical McGuffin (a mysterious black rock of unexplained provenance that is somehow behind it all), and flawed father figures (one who ran from responsibility now looking to make amends, one who accepted responsibility and now resents it). No doubt if I put my mind to it, I could come up with a few more semi-clever alliterative tropes, but suffice it to say IN THE TALL GRASS is on the high end of Stephen King-iness.


That’s not necessarily a bad thing, even if it does make for a strong feeling of familiarity. The real issue with IN THE TALL GRASS is that it tries to stretch a story that might have made a decent episode of The Twilight Zone, or perhaps more appropriately, Creepshow, into a feature film. The result is a film that drags, and whose shortcomings are all the more glaring the longer it goes on.


Writer/director Vincenzo Natali was apparently really keen to make this film, which makes it all the more surprising that he chooses to neuter its ending (you can read the Wikipedia entry on the original story to find out how the source material concludes, if you don’t feel like reading the whole thing), taking what was originally a nasty little horror tale and turning it into something at least meant to be more uplifting and affirming. Bleh.


It’s a well-acted and competently made film, but one that is ultimately unsatisfying and frustrating. And just in case you’re wondering if I’m one of those “the book was better” people mad that things got changed, I saw the movie first, and this was my initial reaction. Learning of the changes made to the short story after the fact certainly didn’t improve my opinion, but it didn’t make it much worse, either.
Posted by Bob Ignizio at 12:00 AM