31 Days of Halloween 2019: Howard Lovecraft and the Frozen Kingdom 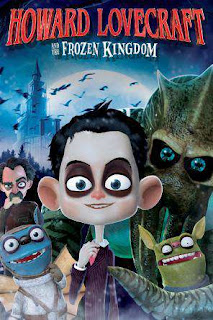 Using the writings and personal biography of horror/science fiction author H.P. Lovecraft as the inspiration for an animated kid flick is an odd, but intriguing premise. And having a young son who shares my interest in the horror genre, HOWARD LOVECRAFT AND THE FROZEN KINGDOM seemed like a potentially good way to introduce the boy to Lovecraft’s bizarre creations.

The film begins with Howard Lovecraft (Kiefer O'Reilly) wanting to help his father recover his sanity so he can come back home to his family. To this end, he reads from the Necronomicon (never a good idea, as anyone familiar with Lovecraft’s stories is aware) and finds himself transported to the frozen land of R’lyeh. R’lyeh is populated by strange beings including a winged, tentacle-faced monstrosity Howard befriends and names “Spot” (Sean Patrick O’Reiley).

Howard and Spot eventually meet the ruler of R;lyeh, one Algid Bunk (Jane Curtin), who promises to help Howard get home and save his father. First, however, he must retrieve a book from a monster named Shoggoth (Ron Perlman) that will enable Algid to restore her land to its former glory.

Despite including such potentially disturbing concepts as the insanity of a parent, and Lovecraft’s central conceit that the universe is ruled by horrifying, omnipotent monsters, there is barely a hint of horror to the proceedings. Instead, HOWARD LOVECRAFT AND THE FROZEN KINGDOM offers up generic kid’s adventure movie tropes, slow pacing, and bargain-basement animation. It’s also hard to see Lovecraft’s most famous horror, Cthulhu, suffer such indignities. At least none of Lovecraft’s renowned xenophobia and racism make it into the film.

The kid was even more bored than I was and checked out well before the end. I feel bad he had to sit through as much of it as he did, but at least I can breathe a sigh of relief knowing he won’t be clamoring to watch the other two films in the series.
Posted by Bob Ignizio at 12:00 AM