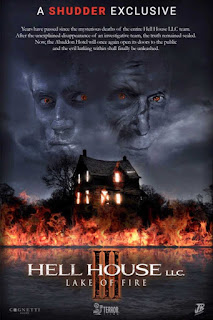 First of all, I missed a day. Real life has been busy, what can I say. Hopefully I'll get caught up and still end the month with 31 reviews, but it's looking rough. Ok, on with the review.

The creepy old Abaddon Hotel that has been the site of murder, mayhem, and reported paranormal activity is saved from demolition by tech entrepreneur Russell Wynn (Gabriel Chytry) who plans on turning it into a performance space called Insomnia. His troupe of actors will be putting on an interpretation of ‘Faust’ while a camera crew from local paranormal program Morning Mysteries, including host Vanessa Shepherd (Elizabeth Vermilyea), films the events leading up to opening night.


All this is shown in past tense, along with interviews and other relevant footage, in the faux documentary and Shudder original HELL HOUSE LLC: LAKE OF FIRE. We don’t know what exactly happened on Insomnia’s opening night as the film begins. We only know it was yet another strange and terrifying event at this seemingly cursed location.


Since this is supposed to be a finished, professionally made documentary, HELL HOUSE doesn’t suffer too much from the sort of herky jerky camera work and long periods of nothing much happening that often turns viewers off from found footage/mockumentary horror films. Even the parts that are found footage were ostensibly filmed by a professional camera crew, so for the most part things look polished but reasonably believable as news/documentary footage. The cast occasionally cross the line into seeming a bit too actorly, but nothing too egregious.


If you haven’t seen either of the prior films in this series, don’t worry. I hadn’t either, and I was able to jump right in. The film offers enough background info to get new viewers caught up without piling it on so heavy as to bore those familiar with the series. The plot is engrossing, thanks in large part to the mystery of exactly who Russell Wynn is and his motivations for buying the Abaddon hotel. And while it’s not likely to rattle seasoned horror fans, there are enough genuinely creepy moments and effective jump scares to please those looking for something that lands somewhere in the middle of the scare-o-meter.
Posted by Bob Ignizio at 12:00 AM